This Lancashire based Oompah band are specialists in getting your party going and can travel throughout the North of England for Oktoberfest celebrations.
Share Facebook Twitter
Recommended 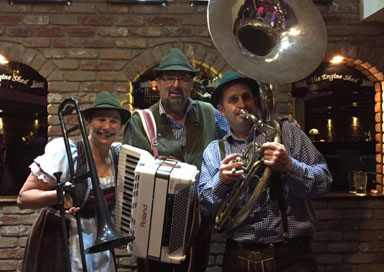 This Lancashire based Oompah band are specialists in getting your party going and can travel throughout the North of England for Oktoberfest celebrations.

They are now acknowledged as one of the UK's top Bavarian shows. Having spent many years working for the famous ‘Hofbrau’ Bierkellers followed by a string of summer seasons in Blackpool, Torquay and Newquay.

The band has a large German repertoire and also plays a selection of European music along with well known sing-a-long as well as classic Pop and Rock favourites.

The terrific sound of brass instruments and electronic accordion can only be described as ‘Footstomping’ that quickly gets everyone joining in dancing, Singing and having a Brilliant Bierfest Party.

Great audience participation makes every night complete with original Munich games and hilarious competitions with prizes for the liveliest tables.

They are suitable for all venues, including... Holiday Centres, Army Camps, Schools, Restaurants, Universities, Clubs and all the best party places around.