Regarded as one of the UK’s leading harpists, this harpist plays both Celtic and classical music and can be booked for weddings and events in Cornwall and Devon
Share Facebook Twitter
Recommended 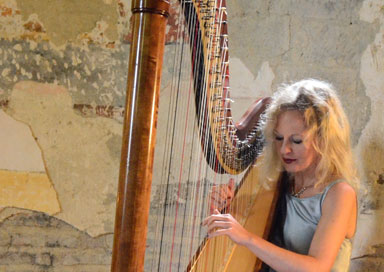 Regarded as one of the UK’s leading harpists, this Cornwall based harpist delights audiences all over the world with performances on her harp.

She has performed at the Royal Albert Hall, Sydney Opera House, Kensington Palace, Royal Opera House, Gucci 75th celebrations in Rome, Radio City New York and recently as part of the Olympic celebrations. She has performed for the HRH Prince of Wales, and as a soloist with the London Chamber Orchestra and the BBC Concert Orchestra. She works extensively with British band Goldfrapp, conductor Charles Hazelwood, composer Graham Fitkin, Adrian Utley from Portishead and French pop star Nolwenn Leroy.

She composes and performs her own works on harp. She has recorded at Abbey Road, Maida Vale Studios and has appeared many times on BBC Radio 2, 3 and 4. She has performed on TV - Jools Holland and Jay Leno’s shows amongst others. In 2014 she toured to Castles and palaces in the UK including Holkham Hall, Fyvie castle, Culzean Castle, Lacock Abbey with her album The Three Harps of Christmas. She has recorded for EMI, Mercury Music, Sony BMG, GFR and Universal.

For weddings she offers a bespoke service, drawing on her extensive repertoire of classical, contemporary jazz and pop classics and beautiful airs from the Scottish Highlands and Ireland. She will tailor her performance to the wishes of the couple and provides a sophisticated and elegant musical presence at exclusive events.

“Having already seen this performer play the harp in a number of concerts and performances in Newcastle, Lancaster and the Lake District, we couldn't believe our luck when she offered to play at our wedding in the South of France. We cannot recommend her highly enough, she is very professional and a delight to have around. All of our guests commented on her wonderful playing. Her music created a heavenly atmosphere in the 13th century chapel that we were married in, and also afterwards for the reception drinks in a nearby chateau. I still get butterflies when I think about how beautiful she made Handel's Passacallia sound while I was walking down the aisle. She also adapted some of our favourite songs to play while we were signing the register which made it really personal. We felt truly blessed to have such an accomplished harpist and such a beautiful person playing at our wedding and she made the day even more special. ”

“Very many thanks for playing so beautifully, looking so elegant and being such a lovely presence at the wedding. Everyone really appreciated having you there and your wonderful music. We all thought you were too good to only be in the background! ”

“John and I just wanted to thank you very much for your lovely harp playing at Helen and Richard's wedding just over a week ago. A lot of the guests commented on your beautiful playing and the music you chose was just right for the occasion. ”