This Yorkshire guitarist has been performing for over 25 years and has a wide repertoire of pieces perfectly suited to enhance and entertain at any occasion.
Share Facebook Twitter
Recommended 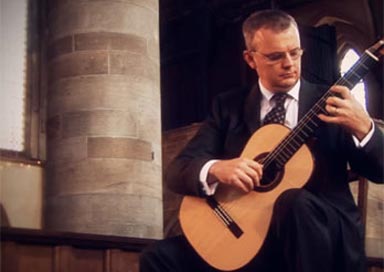 This guitarist began playing the guitar at 17 under the tutelage of Dr Melvyn Willen in his native Essex. In 1989 he moved to Leeds to study for a degree in music. There, under the world-renowned guitarist Graham Wade, he was awarded the Leeds College of Music prize for most accomplished classical guitarist in his year.

His first study and passion continues to be the classical guitar and since graduation he has played in numerous bands and ensembles including The Yorkshire Guitar Ensemble which he founded and directed. This last successfully raised much needed funds for St Martins House Children's Hospice from 1999-2006.

He has taught over a thousand guitar students - both classical and electric - from beginner through to grade 8 and beyond.

“Professional and an exceptional guitarist. He arrived on time, prepared and was truly exceptional. I'd highly recommend him. ”

“He performed at my Mother's 50th birthday celebration. He not only has talent and sounded terrific; but was also easy to work with, kind and considerate. I would recommend him to everyone who would enquire and will certainly work with him in the future if the need arises. ”

“Our ceremony was outside on a beautiful summer day and he was able to provide the perfect touch of elegance and simplicity to complement the event. ”

“He was amazing on the night! Right from our initial meeting he provided us with great communication at all times. ”