This Buckinghamshire wedding guitarist has a degree in classical guitar from the Royal Welsh College of Music and is available for weddings, parties and events.
Share Facebook Twitter
Recommended 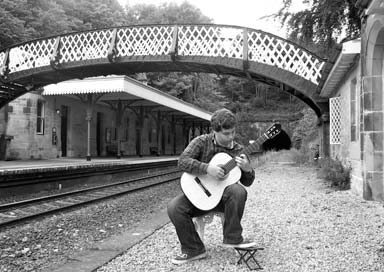 This young guitarist was born in 1996 and has completed his degree in classical guitar at the Royal Welsh College of Music & Drama in Cardiff with the renowned concert guitarist John Mills. He took up the guitar at the age of nine before going on to becoming a scholar at the local music centre and then eventually joining the National Youth Guitar Ensemble directed by Gerald Garcia. NYGE perform at a national level in many venues around the UK .

He is a natural and regular performer on the guitar and passionately believes in the power of music as a medium of communication and this very much comes over in his performances. On leaving college Simon hopes to pursue a varied performing and teaching career.

He maintains a varied repertoire wide enough to suit all tastes and potential situations, whether background or concert performance. His repertoire includes a cross section of popular Spanish, South American, Baroque and nineteenth century pieces. In addition he can include items from the lighter repertoire such as ‘Cavatina’, ‘Spanish Romance’, ‘Classical Gas’ and many others. He is always open to requests and offers a ‘bespoke’ approach to prospective clients.