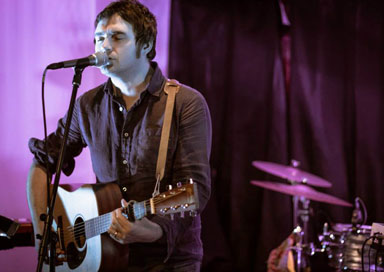 This Glasgow based singer guitarist has been playing solo and in bands for over ten years. In that time he has performed with some amazing musicians at some amazing venues across and the UK and Europe.

Over the years he has developed a strong voice which allows him to sing a wide range of different styles. He worked and lived in England for a period and was the singer for a band called The Rising with Paul Banks of Brit pop band Shed Seven, Robert Maxfield of Audioweb and drummer to music icon Ian Brown of The Stone Roses? and Stuart Fletcher of The Seahorses.

His vocal talents can also be found on the tribute album to one of Scotland's finest songwriters John Martyn. On that album h sang alongside Nick McCabe and Simon Jones of The Verve.?

If you are planning your wedding, function or private party, or if you are a bar/restaurant owner looking to have a top quality live solo singer/acoustic performer then get in touch.

He enjoys playing during the champagne/drinks reception for weddings, private functions and private parties and plays a great mix of old and new classic songs to suit your occasion. He has many years experience of singing and playing at these types of events and can provide the perfect back drop or sing along moments needed to make your event a special one.