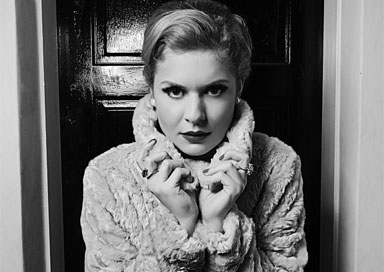 With many years experience of being a wedding singer, she has also had the privilege of performing at funerals, charity dinners and other special events. She has the versatility to sing anything from National Anthems, Opera and Art songs to popular ballads and show songs.

The Wedding Soprano completed her studies under Janis Kelly at the Royal College of Music in London, with repertoire coaching from Gary Matthewman. She completed her undergraduate degree with honours at the Royal Northern College of Music in Manchester (RNCM) studying with Sandra Dugdale. In 2008, she completed the Arts Educational Schools: One Year Foundation Course in Musical Theatre recognised by City University. She has won numerous awards including the Mavis Bennett Award for Grand Opera and the John Lightfoot Award for Musical Theatre at Maidenhead Music Festival.

"Thank you for singing my favourite song, you sang it so well, it touched me so deeply that all the hairs on the back of my neck went up, and I cried."

Highlights for 2014 include coordinating and performing in an opera gala in Bergen, Norway, a recital in Cheltenham Town Hall with the composer Christopher Boodle including a performance of his song cycle “A Garland for Apollo”, a performance accompanied by Leos String quartet in Manchester Cathedral, opening Adam Shaw Couture’s fashion show wearing a custom made dress by the designer.

She reached new audiences when she performed on the 2006 series of ITV1's The X Factor (Auditions and Boot-Camp), BBC1 and Radio1 backing Andrea Bocelli for Children in Need Rocks at the Manchester Arena, Channel 4's series Hidden Talent, on a BBC2 show with Brian Conley, Victor Michael and The Three Sopranos for SKY Arts, and most recently on ITV1’s Who’s doing the dishes? She is equally at home performing on stage, in churches, in recording studios or on television.

"Your voice has a creamy core with a Champagne Sparkle." GM - Professional accompanist and Vocal Coach at the Royal College of Music, London

Future engagements include opera scenes at the Royal College of Music as The Governess in Britten’s The Turn of the Screw, a recital in Sindlesham accompanied by Leos String Quartet, and as part of the Three Sopranos at the Football Association’s Summer Award ceremony. She is thrilled to have been invited to sing at the opening of FC United's new multi-million pound Stadium.

Operatic experience includes; opera scenes of Sir John in Love as Mrs Page, Hansel und Gretel as Sandman and La Cenerentola as Clorinda, and the chorus of productions of Carmen, Tannhauser, La Belle Helene, Candide, Die Fledermaus and La Traviata. Jennifer has taken part in a variety of workshops including improvisation with Opera Erratica, and with Philip Pickett on Purcell's The Fairy Queen. Jennifer was also awarded bursaries to study at Dartington and Abingdon International summer schools where she took masterclasses with Joan Rogers and Jessica Cash. She has performed in a variety of Musical Theatre productions including, as Julie in Carousel, Giulia in The Gondoliers, Sylvanne/Lolo in The Merry Widow, and Emma in Jekyll & Hyde.

In 2013, she collaborated with composer Jim Lahti in New York, USA. He has completed writing a chamber opera for her, which they are hoping to produce in the near future.

“Many thanks for your great performance at our wedding on Saturday. It really did make a major contribution to the day and many guests told us how much they had enjoyed it, especially those who are not really classical music or opera fans. More than one guest said they felt the hairs on the back of their neck standing up during your performance of Nessun Dorma! Thanks especially for learning the new repertoire, we really did appreciate your singing of the Bellini during the signing of the register, it was so lovely and the words were very appropriate. Good luck with your career, we are sure you will have much success. ”

“I just wanted to say a big thank you for performing at our wedding on Saturday. You added the wow factor to our ceremony, your voice is beautiful x ”

“I kept you in my memory. It was a very nice moment when I was with you and photograph at the Oxford town Hall on 14th October 2014. I overwhelmed with your very sweet tune then which I never forget it. Wishing you very good luck and prosperity. ”

“Your performance was outstanding during the service, as I said it made the hairs on my arms stand up and my spine tingle how cool is that and we had only just met!! (I’m joking) but you were awesome !I was humming Nessun Dorma in my head throughout the day, you have a serious talent young lady not that you need me to tell you ”

“Bravo! Bravo! Well done for an absolutely supurb performance on Saturday. We all absolutely loved it, especially my Dad. [...] I'll certainly be booking you again if ever there's an opportunity. ”