This Liverpool based singer songwriter, popular and classical guitarist has had his name indelibly written into the tapestry of the Liverpool music scene.
Share Facebook Twitter
Recommended 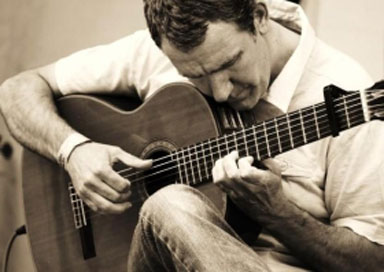 This Liverpool based guitarist is a singer, songwriter and versatile guitarist and has had his name indelibly written into the tapestry of the Liverpool music scene. Having studied classical guitar with Stan Yates at the age of 28, he has continued to charm audiences by masterfully swapping between steel and nylon string guitars.

Faithful to his craft he has introduced many music lovers to an array of classical works by cleverly infusing these with more contemporary pieces.

A regular performer at Liverpool's Anglican Cathedral, The Walker Art Gallery and at the International Guitar Festival of Great Britain, his classical performances have not gone unnoticed beyond Merseyside with over 1 million views on his youtube channel where his performances, in particular ... have been enjoyed, discussed and even debated!

“Every time I see him, he never ceases to amaze me with his guitar dexterity ... and his ability to cover well-known songs to perfection ”

“You produces the best 'raw' rendition? around of Classical Gas, and then just walks off like it was a stroll in the park - sheer class ”

“You are one of the most talented musicians I have come across. ”

“Throughout the evening, numerous guests (some that I'd never met) confessed to being bedroom guitarists and loved it. Cavatina in particular was mentioned on more than a few occasions. ”