This Devon magician has been a full time professional magician since 1981 and is a Gold Star member of the Inner Magic Circle. Available for weddings and events
Share Facebook Twitter
Recommended 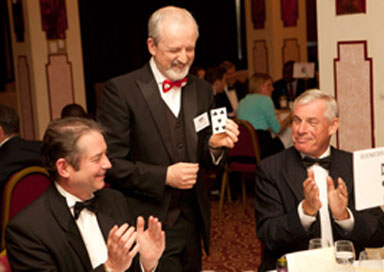 This Devon magician has been a full time professional magician since 1981, and as well as being a member of the Inner Magic Circle with a Gold Star, he has also won a number of magic competitions including the Zina Bennett Close Up Magic Trophy which is awarded by the International Brotherhood of Magicians. When booking him you can be 100% sure that you are getting a true professional, whose magic will enhance your event and enthrall your guests

His particular type of close up magic can be performed anywhere at the wedding. He can amaze your guests during the drinks reception, or baffle them over the wedding breakfast. Moving from group to group whether standing or seating, he will leave your guests chatting excitedly about 'how on earth did he do that?...'

Being a member of the Inner Magic Circle with a gold star, means that he has been recognised by his peers as one of the best magicians in the country - a true expert in his field. Specialising in performing close up magic at weddings, parties and corporate functions, if you want your event to leave a magical impression on your attendees then look no further.

Below are a couple of examples of how he can help make your particular event even more special:

He performs his magic to small groups of people, carrying everything he needs with him - what he likes to call Strolling Magic. Because he is performing right next to his audience, they become totally involved - most people have never seen magic performed so close before! He might perform magic with your guest's ring, or make a ball appear in their hand, or actually get a spectator to apparently perform a trick themselves, all of which helps them to feel a part of the whole magical experience.

Strolling magic requires no special staging, lighting or venue - in fact he has performed on trains, boats and buses, indoors and outdoors - you name it, he'll give it a go!

“Everyone kept saying how brilliant you were - I think it really made it and was a great way of bringing people together. Thanks again for adding in a brilliant way to what was just fantastic all round. We could not have had a better day. ”

“Many thanks for your valued contribution to our Dinner and Dance on Saturday night. The night was a great success and you played an important part in making it a wonderful night. ”

“Thank you very much for your fantastic performance at our wedding reception at Hestercombe Gardens. Having a magician was a last minute decision and one we're very glad we made. So many of our guests are still talking about your tricks and trying to guess how you did them! ”