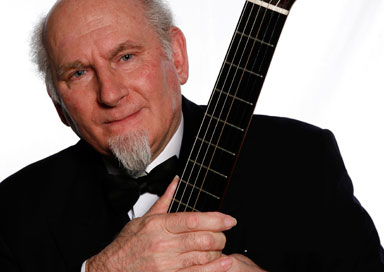 This Lincolnshire classical guitarist started playing guitar at the age of eight, when his mother bought him a guitar that was as big as he was, and was on playing stage at the age of seventeen.

In the early 1970′s he moved to the North East where he played for top artists such as PJ Proby and many others. His music at that time consisted of rock, pop, blues and country.

On his return to East Anglia he met Mr Ronald Taylor who inspired him to study the classical guitar. After passing all his grades with the Associated Board of the Royal Schools of Music he attended Master Classes with top guitarists such as Vladimir Mikulka, Neil Smith and the late Chris Kilvington.

He now has over thirty years of experience of playing electric guitar, bass and classical guitar and is based in the Lincolnshire area, teaching at various Schools and performing at corporate functions weddings and special occasions. He has full Public Liability Insurance and all his equipment is PAT tested for safety.