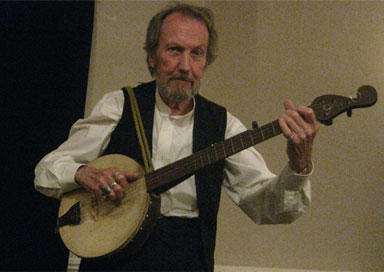 One of England's best-known banjo players, he is known for his unique mellow tone,  acquired by using bare fingernails rather than metal fingerpicks.
Although he recorded two albums - Banjo Bounce and Picking And Singing in the '70s with guitarist and vocalist Roger Knowles, Stanley has made his greatest contribution to music as a skilled banjo builder.

He also recorded an album with the renowned guitarist Wizz Jones in the 1960s - they made their names in this era, starting in skiffle bemused by American folk, blues, bluegrass and “old time music," their careers took off around 1960 in the folk clubs, blues cellars and student bars where this music flourished.
Virtuosos on their instruments, they were big names in a small world.

In 1964, after tentative brushes with recording, they entered the studios to record the album, now reissued with bonus tracks. There is no doubting their influence: the notes to this CD are written by the well known English musician Ralph McTell, who enthuses nostalgically about his collaboration with them, and guitarists such as Davey Graham and Bert Jansch, whose contributions to British music are better known and documented, played with and were undoubtedly inspired and influenced by them.