Aside from her concert work which takes her to venues both nationwide and in Europe, this guitarist is also experienced at performing at weddings and functions
Share Facebook Twitter
Recommended 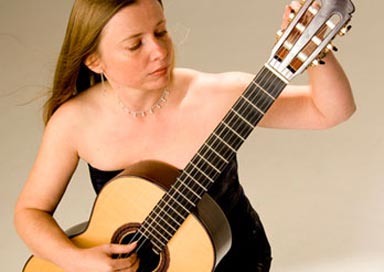 Aside from her concert work which takes her to venues both nationwide and in Europe, this guitarist is experienced at performing at weddings and a wide range of functions including an award ceremony at The Four Seasons Hotel, Park Lane, London and a Law Society dinner, Chancery Lane, London.

She is a highly skilled musician, both a Graduate and Post Graduate (gaining a Distinction) of Trinity College of Music, London. She taught the guitar and was a chamber music coach at the Royal Conservatoire of Scotland (formerly Royal Scottish Academy of Music and Drama) between 2002 – 2008). Her repertoire delights guests and includes well known classics, highly melodic romantic music and Spanish and Latin American music.

Live music can help relax guests without being overpowering.

She is an exciting and lyrical guitarist who has played at seven International Guitar Festivals of Great Britain where she received great critical acclaim.