This harpist is one of the few UK harpists who plays both a full-size concert harp, and a small strap-on electric harp and is available for weddings and events
Share Facebook Twitter
Recommended 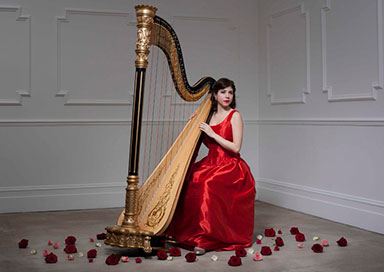 This harpist is one of the few harpists in the UK who plays both a full-size concert harp, and a small, strap-on Electric Harp. A gifted classical and jazz harpist, she recently embarked on a residency under Deborah Henson-Conant, the world's foremost electric harpist, in the United States. She studied the harp with Eira Lynn Jones at Chetham's School of Music, in Manchester and spent her early years training as a junior at the Guildhall School of Music and Drama, under the guidance of Charlotte Seale, where she was later offered a scholarship to pursue fulltime studies.

She has enjoyed much collaboration with various solo instrumentalists, orchestras, singers and pop groups. Recent collaborations include playing with The Noisettes, the Emily Dankworth Jazz Quartet, her harp & vocal duo and The Staircase Band, providers of whirling gypsy hurly-burly, Balkan beats and Klezmer.

"For full-on romance, a harpist is the perfect option. Having played everywhere from the Royal Albert Hall to Vivienne Westwood catwalk shows, she covers a wide repertoire including classical, jazz and Celtic love reels."  Sunday Times Style Magazine

"On stage, she demonstrates great flair, poise, and the natural communicative skills which cannot be taught. In short, the audience adored her, and it was a joy to share the stage with her." Deborah Henson-Conant, Grammy-nominated Harpist

“If you want to add a touch of class to your special occasion, I would highly recommend these two wonderful musicians. Proficient from start to finish, I dare you to find more accommodating and accomplished professionals than these two. Ten out of ten! ”