This act has performed with the Philharmonia and Northern Sinfonia and can be regularly heard at Claridges, the Houses of Parliament and on the QE2 Cruise liner
Share Facebook Twitter
Recommended 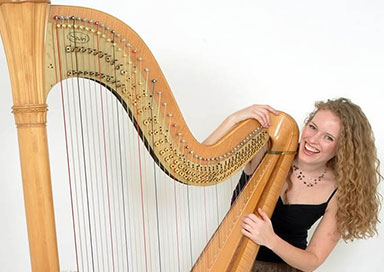 This harpist has been performing at weddings and functions since 2003 and studied both at Oxford University and Trinity College of Music. She has performed with top orchestras such as the Philharmonia and Northern Sinfonia and is in high demand as a performer playing everywhere from Claridges to the Houses of Parliament, Fabric Night Club and aboard the iconic QE2 Cruise liner.

She has made several TV appearances including duetting live with Dermot O'Leary on Celebrity Big Brother and also performing with Florence and the Machine at the BRIT Awards. Her repertoire includes pop music such as Coldplay and The Beatles, light classical, jazz standards and even Bollywood tunes! She likes to accommodate requests where possible and prides herself on being punctual, smiley and professional in her approach to every event she plays at.

She not only plays on a full size concert harp but can also create a more modern feel to the evening with her dazzlingly white electric harp. Played standing up, this harp is custom-made and adds a funky vibe to any event.

Other options for an evening of musical entertainment include harp duet, harp quartet, oboe and harp, and cello and harp music.

“How can I thank you enough for the wonderful playing both at the church and the reception...the guests were overwhelmed and thoroughly enjoyed your performance ”

“Your harp music created a wonderful ambience for the evening. ”

“I would like to thank you very much for the lovely lunchtime recital last Friday. We all enjoyed it and everyone appreciated the valuable information you gave us about the harp...I have had some most positive feedback from the audience, and they hope you will be able to come back again. ”

“Dear Geoff, The harpist played beautifully at our daughter's wedding last week. Predictably I had little time to thank her so would be pleased if you could pass this message on to her. Many of our guests commented on her wonderfully lyrical choice of music.With thanks again ”

“Dear Geoff, I would like to thank you for arranging the harpist for my wedding day. With everything else going on in the build up to the big day, it was extremely pleasing that the process for placing the booking was simple and that everything went to plan and was as agreed. With regards to the Harpist who played on the day, may I say that she was absolutely fantastic! The Bride did not know that the Harpist would be playing and was surprised (happily) when she entered to the wonderful rendition of the Flower Duet, during the ceremony. Her renditions of the various classical, modern pop and Bollywood tunes that were requested for the Civil Ceremony and Drinks Reception were all well received. Most of the guests commented on the wonderful music being played on the day too. I would happily book this Harpist again and recommend her to my family and friends. Thank you again. ”