This harpist graduated in 2013 from Trinity Laban Conservatoire London, with a BMus 1st Class Honours Degree in harp performance and is available for all events
Share Facebook Twitter
Recommended 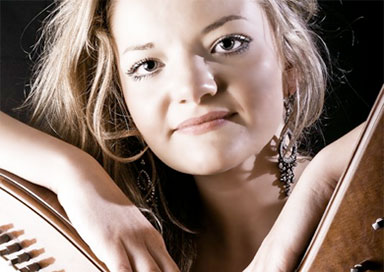 This harpist graduated in 2013 from Trinity Laban Conservatoire, London, with a BMus First Class Honours Degree in harp performance and gaining a high Distinction in an LTCL Diploma for Music Teaching.

Born in Leicestershire, and previously a music scholar at Oakham School, she has been playing harp since she was 7 years old. She studies under Gabriella Dall’Olio, and studies early music on the triple harp with Frances Kelly. She has gained a Scholarship to continue her studies on a Masters of Music Performance course, and has been awarded a Musicians Benevolent Fund Postgraduate Performance Award. Alongside these prestigious awards she was also presented with a Penske Automotive Scholarship and City Livery Club Prize.?

Shge has won many prizes for her playing in festivals and competitions, including Leicester Young Performer of the Year aged just 13 and the John Marson Harp Prize in 2012, leading to a solo recital at St. Martin in the Fields, London. She was principal harpist with the CBSO Youth Orchestra for six years, a position she also held with the award-winning Northampton Youth Orchestra from the age of twelve until leaving to start her studies at music conservatoire. She has participated in many masterclasses with such eminent harpists as Fabrice Pierre, Sylvain Blassel, Letitzia Belmondo and Elizabeth Fontan Binoche.?

She had her concerto debut at St John’s, Smith Square, London, at the age of 15, and has travelled widely with her harp, playing both solo and orchestral works in Spain, Belgium, France and Portugal. She has played in many prestigious venues in the UK including The Royal Albert Hall, London Barbican, Cardiff Millennium Centre, Birmingham Symphony Hall and Festival Hall at London’s South Bank. ?

Regularly invited to play for dignitaries, she has performed for members of the Royal family, including Her Majesty the Queen, and also for Lord Lieutenants. She has worked closely with composer Amir Sadeghi, with whom she has recorded a world premiere with the Marson Harp Trio for BBC Television, and also regularly plays as part of a flute and harp duo with Alice Thompson, a clarinet and harp duo with Christopher Hatton and with Soprano, Emma-Claire Crook. ?

She has a love of orchestral playing, regularly performing with orchestras such as the Leicester Symphony Orchestra and the Bardi Orchestra at Leicester's De Montfort Hall. She has also worked under many eminent conductors including Sakari Oramo, Edward Gardner, Jac Van Steen, Andris Nielson, Claus Efland, Rainer Hersch among others.

A highly popular performer at weddings and corporate events she has played for many prestigious clients, including new launches of BMW and for Frank Benbini of the Fun Lovin’ Criminals on his CD, “Smiles for Miles”.

She is grateful to be supported by the Sir Andrew Martin Trust, The Gordon Robinson Memorial Trust, The Norman Gill Trust and The Dorothy Johnson Trust.

“Samaya was an excellent booking for GSS Architecture's Midsummer Client Event and she performed a perfectly prepared combination of classical and contemporary songs that fit the event very well. The booking process was extremely straight forward and it meant that we could relax in knowing that Samaya was booked and would be arriving on time, which she did after phoning and double checking all details. A very professional service from booking through to the event itself and we are planning on booking Samaya for our event next year as a result! ”

“I would like to say how much I enjoyed the beautiful music you played at my daughters wedding at Rothley Court on the 16th April. Thank you very much! ”

“Both Andrew & I would like to thank you very much for attending & playing at our civil partnership. You were fantastic and you will be highly recommended by us to anybody. ”

“Just want to say a huge heartfelt thanks for playing at our wedding just before christmas. You set the atmosphere perfectly and everybody there thought how lovely and special the music was. Once again thank you very much and hope to see you again sometime. With love and best wishes. ”

“Dear Geoff, thank you for your email. Our evening was a success even though the weather proved to be an obstacle which was beyond our control.I would like to thank you for providing our harpist. She was excellent and everyone enjoyed the entertainment. She was very smartly dressed and looked just the part. We would be happy to use your services again in the future. The booking process was very straightforward and an easy process.With kind regards ”

“The harpist was fantastic. We didn't have a bad word to say about her. She learnt a song for us on the harp which we really appreciate. She was in constant contact with us. She was dressed smartly and to our colour theme to. We couldn't of asked for anything more. Thank you for everything. ”