Lea began playing the harp when she was 9 while growing up in Scotland and now performs for weddings and events throughout the South East of England.
Share Facebook Twitter
Recommended 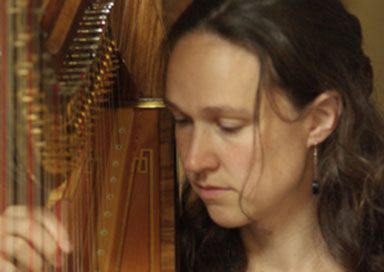 This a professional harpist is based in Sussex, and specialises in both concert and Celtic harps.

She has played the harp since she was 9 and grew up in Scotland, which was a happy time filled with Gaelic songs, hill walking, and searching for ancient stone circles. At 9 years old she began Celtic Harp lessons with Scottish harpist, Anne Macdearmid. On moving to Sussex four years later, she was taught by Sussex harpist Helen Arnold. She was able to begin studying the Concert Harp thanks to a County Music Service Scholarship, kindly arranged by Helen, and in 1998 she achieved Distinction at Grade 8.

University
Her decision to apply for a Bachelor of Arts Degree in English and Music at Keele University was a reflection of her love for music and the written word. During this time she took lessons with Robert Johnson, a teacher at the Birmingham Conservatoire, and then Thelma Owen, from the Royal Academy of Music. She made her debut playing the Debussy Danses which she performed with Keele Philharmonic Orchestra in Paris and across Brittany. She graduated in 2003 with a First in Harp Performance.

Professional Career
Her playing has taken her to many countries across Europe and as far afield as China and the Unites States. Closer to home, she has played in cottages, marquees, village halls, mansions, cafes, hotels, churches, castles, the Royal Albert Hall, Wembley Arena, Kensington Palace, Sandhurst Royal Military Academy, London's Carlton Towers Hotel, and the Cafe Royal.

Arranger
This harpist has arranged a number of tunes composed by the seventeenth-century blind Irish harper, Turlough O'Carolan. Her interest in this extraordinary music led her to join the Cambridge Music of the Heart Conference in 2005, where she collaborated with Brian Keenan, author of Turlough. Brian shared his experiences as a hostage in Beirut, Lebanon, and his connection to the Irish harper O'Carolan. Fellow contributors were Sir John Tavener and Nigel Osborne. The inter-disciplinary nature of the conference brought heart surgeons, artists and musicians together to share their knowledge and promote a more holistic approach to understanding the organ of the heart.

Love the Earth
In November 2010 she joined the Docklands Sinfonia at the Royal Albert Hall to perform music composed and conducted by Imogen Heap for her 'Love the Earth' project.

World Peace
She performed her compositions at Wembley Arena in 2006 for an event to celebrate the United Nations International Day of Peace. Other collaborators included Ruby Wax, Tania Bryer, and Robin Gibb (Bee Gees).

Celtic Harp
She has played in many bands over the years. Andrew Norman and the Blaxland Sisters headlined at the Chiddinglye Folk Festival in 2004, and the following year she supported the Irish singer Niamh Parsons at the White Hart. In 2006, Wasps in the Woodshed, a celtic band, supported Last Night's Fun at the Hailsham Pavilion in Sussex. Later the same year, she formed a duo with French harper Francois Pernel and travelled the UK with their Contemporary Celtic Harp Tour. They performed a series of 21 concerts of O'Carolan arrangements and her own compositions to a range of audiences, including children and adults with special needs.

“Many weeks flew by since the day you graced our wedding with the heavenly sounds of your harp. Peter and I would like to thank you for your art and dedication, for your music and sensitivity. Your presence lifted everyone's spirit... I send you my wishes of uplifting many more occasions and joy as you dance on your path of music. With love. ”

“Thank you again for coming to play for us at Beaurepaire House, and for contributing so directly to the successful launch of the music festival. You charmed everyone with your music and your personality - and were from first to last wonderfully professional to do business with! With all good wishes. ”

“We wanted to write to say a BIG thank you for the beautiful music you played at our wedding ceremony. it was incredibly beautiful and you did so well to play in the rain. We really appreciate all your effors and for being being such a good sport. The rain didn't dampen our spirits at all and we had the most wonderful, fun and special day. Thank you for the part you played in that. I am so sorry I didn't get the chance to personally thank you on the day but I was so touched by your rendition of Lovely Joan and would like to offer you such thanks for playing that in memory of my nan. It meant an awful lot to all my family as well as myself. You played beautifully and brought such a special quality to our wedding day and we are so thankful to you. We hope you didn't get too wet and you enjoyed the day too. With kind wishes and sincere thanks ”

“Thank you for playing our our Ladies Festival on Saturday; your musical accompaniment was much commented on and much appreciated by the guests. I would have no hesitation in recommending you in the future. ”