This experienced harpist began playing in 1987 at the age of 10, and was awarded a major music scholarship to Badminton School, Bristol the following year.
Share Facebook Twitter
Recommended 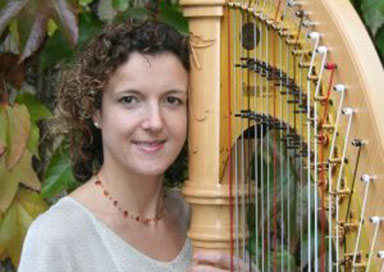 This Monmouthshire wedding harpist began the harp in 1987 at the age of 10, and was awarded a major music scholarship to Badminton School, Bristol the following year. By 1985, when she commenced the BMus course at Goldsmiths College, London University under Danielle Perrett, she had gained Grade 8 on the harp, flute, piano and saxophone.

After teaching music, she spent 2 years studying for a Postgraduate Diploma in Performance with Valerie Aldrich-Smith at the Royal Welsh College of Music and Drama, Cardiff, which included 3 months on an exchange scholarship at Turin Conservatoire under the guidance of Gabreilla Bosio.
Upon returning from Turin, she won the advanced harp class at Bristol Eisteddfod. In June 2004 she attended a harp course in Naples and later won the advanced harp competition in the National Eisteddfod of Wales.
Since then she has been teaching the harp in Gwent and Herefordshire, as well as privately, and in 2006 recorded her debut harp album called Strings Over Time.