This harpist is in great demand as an orchestral player across the UK, performing with the Orchestra of Welsh National Opera while also playing for weddings
Share Facebook Twitter
Recommended 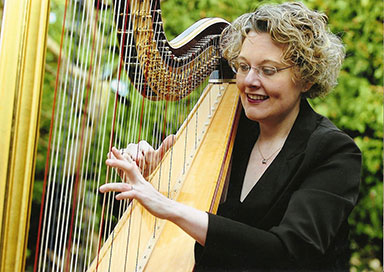 The Monmouthshire Wedding Harpist is in great demand as an orchestral player and soloist throughout the UK, regularly performing with the Orchestra of Welsh National Opera (WNO), and having worked with the company for a number of years, she has accompanied many great singers including - Bryn Terfel, Lesley Garret, Jose Carreras and Rolando Villazon.

With her roots lying firmly in Wales, The Monmouthshire Wedding Harpist has won many competitions including the Blue Riband at the National Eisteddfod, and the first prize at the World Harp Festival (Cardiff, 1992). With the aid of the Scholarships from the Welsh Arts Council she studied at the Guildhall School of Music & Drama, London, and from 1995 - 1999 she attended the Aspen Music Festival, USA, performing with many eminent musicians, as well as broadcasting on national television.

As a soloist The Monmouthshire Wedding Harpist is in great demand. She has performed Mozart's Flute & Harp Concerto with WNO / Carlo Rizzi at St David's Hall, Cardiff, as well as performing the work throughout the Midlands with the Orchestra of the Swan (with whom she is also Principal Harp). She frequently collaborates with other artists in various ensembles. She performs regularly with CBSO cellist David Powell with whom she formed '51 Strings', as well as working with other musicians to form collaborations for flute & harp and viola & harp. As an accompanist she works with many singers from the Opera Company.

The following list is a guideline of music suitable for Wedding Services. Specific requests are welcome.
[* - Unsuitable for Civil Ceremonies]

Entrance of the Bride (Processional)

Departure of the Bride & Groom (Recessional)

Modern Suggestions for the Processional/Recessional:

Music During The Service & Signing Of The Register