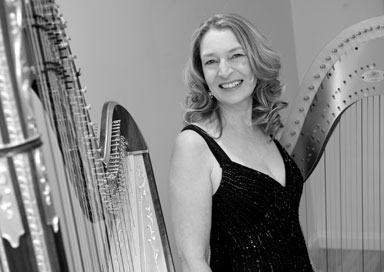 During her studies at the Royal Welsh College of Music and Drama she received the prestigious Pernod award. She was chosen to represent Wales on a UK tour with the Wales Tourist Board and played in Minneapolis, U.S.A. representing the UK with the British Tourist Authority. She also recently worked with the Welsh Development Agency promoting Wales.

She has appeared on numerous television programmes as a harpist and presenter, and recently released her new CD "Hafan" on both Radio Cymru and S4C's Wedi 7 programme.

Her repertoire ranges from the traditional music of Wales (which she often sings!) to the concert harp repertoire and just for fun, rag, blues and popular classics are often thrown in!
Having travelled and performed worldwide over the past 25 years there have been so many memorable occasions, too numerous to mention! Though her favourites were cruising and working in the Middle East.

This year she has been working on her next CD, formed a Harp Ensemble, worked on the Committee of the International Harp Symposium as well as completing a tour of Wales doing concerts.