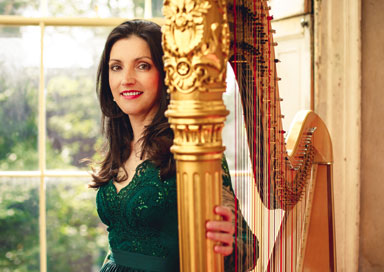 She worked for four years as Music Education Officer for the Music Association of Ireland, organising concerts and workshops and was Assistant Administrator for Music in Great Irish Houses Festival 2005-2007. She now examines for the Royal Irish Academy of Music and lectures in St. Patrick's Training College, Drumcondra.

She has been a member of the National Youth Orchestra, the Ulster Youth Orchestra, the Belfast Harp Orchestra and was a consistent winner at the Feis Ceoil, winning prizes in Irish harp, Concert Harp, singing and composition. She has toured in Europe, USA, Africa and Asia and has appeared on B.B.C., R.T.E. and C.N.N

The Dublin harpist has worked as a freelance pedal and Irish harpist throughout Ireland, Europe, North America, Africa and Asia. She began her harp studies with the late Sr. Eugene McCabe at Mount Sackville School, Dublin, later studied with the renowned French harpist, Sebastien Lipman, and attended masterclasses with Professor Witsenberg and Han Ann Liu.

She has performed with the Irish Chamber Orchestra and has appeared on stage with Andrea Bocelli, Sinead O’ Connor, The Chieftains, The Celtic Tenors, Tommy Fleming and Katherine Jenkins.

The Dublin harpist has appeared on several TV networks including, RTÉ, TG4, BBC, CNN and NHK (Japan). She is a musician in residence with Fingal County Council for 2019 and 2020.

Entrance of the Bride (Instrumental)

Lighting of the Candles (Instrumental)

Lighting of the Unity Candle (Instrumental)

Signing of the Register (Instrumental)