This harpist graduated from The University of London with a BMus (Hons) degree in music, where she specialised in the harp - available for all types of events.
Share Facebook Twitter
Recommended 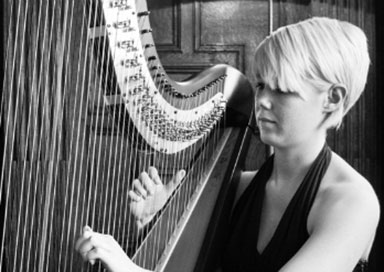 This harpist graduated from Royal Holloway University of London with a BMus (Hons) degree in music, where she specialised in harp performance, after gaining a place on the highly competitive Solo Performance courses. Alongside her studies, she took on the role of principal harpist in both the Royal Holloway Symphony and Chamber Orchestras. She also has diplomas in harp performance and piano teaching awarded by the ABRSM, and a diploma in piano performance from Trinity College London.

She has provided harp music for a wide variety of events at venues all across the South-East of England, including Wentworth Golf Club, the Savill Gardens in Windsor, the HMS Warrior, Leeds Castle, and several National Trust properties. She regularly performs in concerts for a range of orchestral and choral works, including a number of performances of Britten's Ceremony of Carols, and other works such as Faure's Requiem, Bernstein's Chichester Psalms, and Rutter's Magnificat. She has played for several shows, including productions of The Wizard of Oz, Sweeney Todd, and Kiss Me Kate.

She is an experienced wedding harpist with a wide repertoire, and can offer the following services:

Ceremony
She can play for 30 minutes as the guests arrive for the wedding ceremony.
She can also provide music during the ceremony for:

Reception
She can play during the drinks reception to keep guests entertained while the photographs are being taken.

Wedding Breakfast
Background music during the dinner creates a wonderful atmosphere. She will discreetly pack up the harp and exit before the speeches begin at the end of the meal.