This harpist has played extensively for weddings and events in venues across Britain and is able to change the repertoire to suit the mood and type of client.
Share Facebook Twitter
Recommended 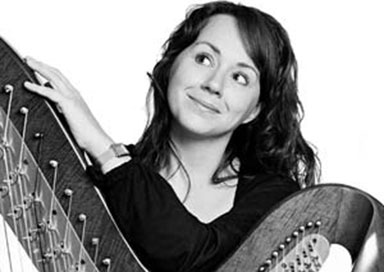 This fantastic harpist has played extensively for conference and events in numerous hotels across Britain and is able to change the repertoire to suit the mood and type of client - from large corporate 600 people dinners to intimate parties of 10 or less.
If your event has a theme, please let us know, as she will tailor make the music and even wear an appropriate outfit to tie in!

She has played for many celebrities at corporate events including Gary Lineka, Christopher Walken, Dannii Minogue, Meg Matthews, Angela Griffin, Jason Donovan and Simon Le Bon. In August 2005, she played at the star-studded event All* Ryder Cup August 05/06, held at the Celtic Manor attended by the likes of Catherine Zeta-Jones and husband Michael Douglas along with Ronan Keating, Chris Evans, Sir Steve Redgrave, Jodie Kidd, Haley Osment, Michael Chang, James Nesbitt and original Charlie's Angel Cheryl Ladd, amongst many others.
She is able to play a 3 hour set without music.

This artist has always had a love for jazz and in 2004 she was invited to support Jamie Cullum when he played for a charity concert in the Celtic Manor, Newport. She performed a 2 ½ hour set with jazz brothers Chris and Marc O'Connor on double bass and drums. The audience was full of celebrities, including Meg Matthews, Angela Griffin and Dannii Minogue.

Dannii Minogue
In September 2006 she was invited to record with Dannii Minogue. The track 'I'll be home for Christmas' is Dannii's first-ever festive track. It was released on the Spirit Of Christmas album, exclusively available through Myer stores across Australia. The artist co-arranged the song with Nigel Hart of Shabbeyroad Studios, Caerphilly and recorded it in Strongroom Studios, London with Dannii, drummer Karl Brazil (currently on tour with James Blunt) and Al Mobbs on bass.

The Entrance of the Bride

Or maybe something modern...

“Your music was wonderful, you were extremely professional and you gauged the tone of our event perfectly. For someone who was running around trying to get caterers, guests and staff organised, these are ideal qualities!! ”

“We had a super evening and received many compliments from our guests. The atmosphere was certainly helped by having a harp as an integral part of the event and your playing was delightful. ”