This 6 piece band began in 2002 by a group of friends who wanted to dress up and get invited to more parties - they specialise in disco covers and party songs.
Share Facebook Twitter
Recommended 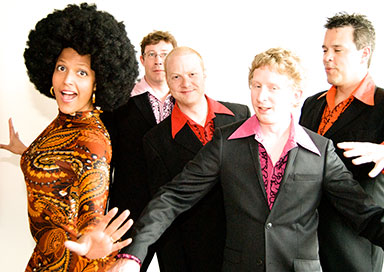 This is a 6 piece band from Bath specialising in disco covers and party songs.

Since forming in 2002, they grew into a professional covers band they are today - but with a fun energy that brings any party to life. Many of the musicians are now successful session musicians who can give the music a polished professional sound.

Playing songs from the disco era like Chic and Sister Sledge, but bringing it up to date with songs from Moloko, Estelle and Cee-lo Green, there's sure to be a song that will have you up on your feet.

“Angela and I would like to thank you and all the band members very much for your great gig. We loved it, as did everyone else! ”

“Guys thank you SO much for Saturday night - you were FANTASTIC and everyone loved it, we had such a fun evening! ”

PA and lighting provided as standard