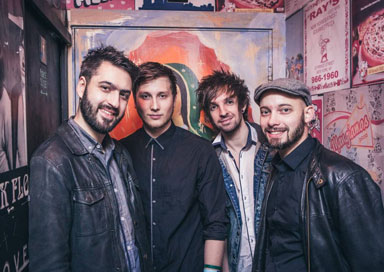 Let’s face it, when choosing a band for your event whether it be rock, pop or jazz music, the main criteria is that every guest finds their way on to the floor to bust out some moves.

These guys provide a fun and interactive show that incorporates ALL of the biggest hits from the past 50 years. Take a look at what their previous clients say and it’s clear to see why these guys are one of the busiest bands that we represent. So if you want to see your Granny doing the air guitar or your Dad doing that crazy dance that all dads do then book this band now.

Just make sure you have a video camera on you at all times because ‘You’ve Been Framed’ still pays £250 per clip!

This 4 Piece Band as standard, consisting of:

In addition, they provide a DJ Option when they are not performing.

“We had a brilliant night on Saturday and this was down to you guys. All our family and friends have been raving about you ever since and one has asked me to check if you are free on December 15th for their Xmas party? Thanks again guys we could not have asked for a better night. ”

“Hey guys! Sorry for the delay in sending this across, but we went straight off on our honeymoon after the reception. I just wanted to say that you totally exceeded my expectations when you performed at our wedding. We have had so many comments and texts from guests asking where we found you so I think we will be seeing you again rather soon. Thanks again for everything and particularly for learning our first dance, which really meant a lot to both of us. ”

“We where all very happy with the band and how professional they where. I have had people asking for their contacts so judging by that feedback they went down well with the crowds of Young Farmers. I look forward to working with them again. Thank you. ”