This Essex band play songs from James Brown, The Beatles, Stones, Stevie Wonder classics to the Kings of Leon and the Kaiser Chiefs - and everything in between.
Share Facebook Twitter
Recommended 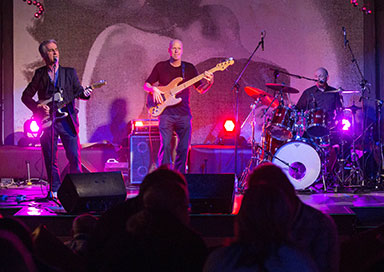 Are you looking for an experienced band to make your party great? They have played at 100s of weddings, birthday parties (from 21st to 75th!), office, Christmas and New Years Eve parties, corporate events and fund-raising and charity balls, playing songs from the last 5 decades – everything from the Kinks to the Killers.

Here's what they do and how they do it:
They will arrive at least an hour before the party starts to set up all their lighting and sound equipment.

In between sets their iPod play lists include Lady Gaga, Katy Perry, Plan B to Wham and Abba to The Arctic Monkeys and MC Hammer! They can play your iPod playlist too – so no need for a DJ!

They stay in contact during your event preparations and are always on call to offer advice and experience on first dances, special requests, speeches etc.

“Just wanted to say a big 'thank you' to you and the 'boys' for giving us a rocking night last week. It was great and hopefully we will be able to do it all again sometime! Kind regards ”

“Thanks to you and the rest of band member for giving us such a good time last night. It doesn't need me to tell you that the rest of the guests enjoyed your perfomance because they were up and at it all evening. I have already had several messages expressing how well everything went so thank you. I have no doubt that your name will be spread so hopefully you will get more bookings in due course. With my best wishes for the future... ”

“Hi guys - I am here on my honeymoon but wanted to tell you how bloody brilliant you were on Saturday night. New Husband aside, you were the highlight of my day and everyone has commented on how good you were x ”

This band provide their own PA and Lighting