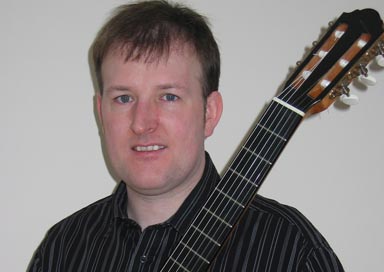 This Belfast guitarist is available for weddings and functions. His interest started 40 years ago when his dad taught him a few chords on a guitar.
Since that time he has studied Classical Guitar with a variety of teachers and has been fortunate enough to perform at public Master Classes for a number of leading guitarists including David Russell, Manuel Barrueco, Simon Dinnigan, Fabio Zanon, Graham Devine and Jose Manuel Dapena.

Brazillian guitar virtuoso Fabio Zanon remarked about him, "you know how to get the most from your guitar."
He plays regularly at weddings, dinners and other functions and has contributed his musical skills at various events and festivals including BBC Music Live and the Ards International Guitar Festival.  He is a highly respected player in the Northern Ireland Classical Guitar community.

The music played covers a pleasant mixture of styles from Classical / Baroque / Spanish works to more upbeat modern themes and love songs - something to complement each mood of your special occasion, providing a classy musical backdrop for you and your guests.
Your music will be played on fine hand-made instruments enhanced subtly with state of the art acoustic amplification. He has an extensive repertoire and can provide music tailored to suit your needs.
View similar acts:

“We were very happy with John who played guitar at our wedding on 2nd May 2015. He was very friendly and made very helpful suggestions and he was able to accommodate all our song requests. His playing created exactly the ambience that we wanted and numerous guests commented on the great music! We were really pleased and would recommend him and your 'find a performer' service which was very easy to do and met all our requirements. ”