This cool, dynamic five-piece group of talented musicians play classic hits from the 60s to present day and are guarantee to keep your dance floor
Share Facebook Twitter
Recommended 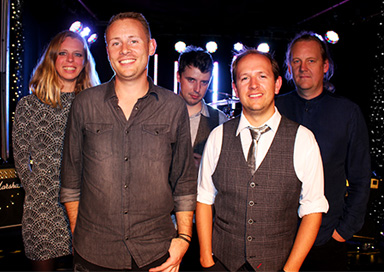 This cool, dynamic five-piece group of talented musicians play classic hits from the 60s to present day and are guarantee to keep your dance floor packed from the minute they strike up.

With a fat groove, soulful vocals and infectious energy they have come to the attention of the national press with Kitty Dimbleby exclaiming "You were AWESOME - any band that can get me pogoing in a corseted dress is OK by me!" and Bel Mooney saying simply "You were brilliant!".

Their line-up includes male vocalist, drums/backing vocals, bass/backing vocals, lead/rhythm guitars and keys/backing vocals! Between them members of the band have toured extensively throughout Europe and have made regular appearances on TV, film and radio most notably Later with Jools Holland, the first Captain America film and BBC Radio 2 and 3.

The band have a top of the range professional PA system and lighting rig to highlight the band. They can provide also recorded music in their breaks or supply a full DJ service for an additional fee. The band normally play two 45 -minute sets but this can be extended by arrangement.

“Thank you very much. We had an absolute blast. There were so many comments on how awesome you guys were! Everyone had a great night and you guys were a breeze to work with. Thank you also for the acoustic duo who were nothing short of brilliant. They played songbird when Rachel came in and she loved it. We will be recommending you highly. ”

“The band were a lovely group of guys and girl. A pleasure to work with and fantastic musicians. A great band. Thank you. ”

“We hired them for a second time for our New Year Party. Once again they really added atmosphere and made the event memorable. Thanks very much. ”

“They were were fantasic. Their rendition of our first dance, John Legend's All of Me, instantly set a welcoming party atmosphere which we, and all our guests, enjoyed. Thanks for a great evening. ? ”

“I just wanted to say a big thank you to and the DJ for playing for us on Saturday night. We had a wonderfull time and all the music was amazing?? ”

“On behalf of the Parents? Association at Shiplake College I wanted to thank you and your band for the most fantastic show. By the looks of everybody dancing everybody had a great evening and we have had amazing feedback from our guests. ”

“Thank you so much for being such an fantastic band. You guys were amazing and loads of people said so.?? ”

“We hired the band for our company party this year having seen them play a few years previously at a wedding - and they were once again fantastic.Their effortless mixing of older classics and new modern tunes got everyone dancing immediately ? and people didn?t stop until the early hours. From planning the event to managing things on the day, they are easy to work with and accommodating to special requests. 85% of our guests rated them ?8 out of 10 which says it all. These guys are the best at making your event stand out from the crowd ? don?t miss out on their talent. ? ”

“I just wanted to drop you a line to thank you for all your help in the run up to Saturday and to thank the band for a fantastic night. We had so many comments on how good you were and the absolutely perfect set list. Jen and I loved every second of it. Particular thanks for the first dance. Thanks for taking the time to put it together ? it was exactly what I had hoped and the arrangement was amazing ? ”

“Picking a live band is never easy. There are so many to choose from and will they be a highlight of the day or a disappointment? As important, with everything else on the to do list, how simply will they be to organise? Look no further - they are brilliant on all fronts. Graham was a delight to deal with and we sorted out all of the details quickly and efficiently. The band turned up, set up and made the evening -including a fantastic light show. The dance floor was full all night and everyone agreed that the music was fantastic! Make your life easy ? give them a call then enjoy all the compliments that follow for a job well done. ? ”

“Thank you! Everyone absolutely loved the music, you were all fab ”

“I just wanted to say a massive thank you to the band for the fantastic music at our wedding. Lots of our friends and family commented on the great band. Everyone really enjoyed themselves including both of us so thank you so much for putting on a great show! We will recommend you to everyone we know ”

the guests and we really enjoyed it a lot! We'd be delighted to hire and/or recommend you for future occasions. ?, Sascha Wilkens (London)

“We just wanted to say a massive thank you! Everyone loved you guys! People still talk about you now! You got everyone dancing with a great choice of songs, you all sounded amazing and definitely made the evening! We wouldn't hesitate to recommend you ”

“Many thanks to you and the band for Saturday night, you were brilliant!! Couldn't have been happier with the setlist etc and your fab sound. Lots of guests also commented on how great you were.?Livin' on a prayer & jonny b Goode were particular highlights.?? ”

“Graham, a huge heartfelt thanks to you and the band for a great night on Friday. You guys were the talk of the after wedding party all day on Saturday?? ”

“We booked them for our wedding. From first contact, to final song, the band were truly professional. Without question, one of the best wedding bands you will find, and our wedding certainly wouldn?t have been the same without them. Top band, Top Music? ”

“We checked out many wedding bands in our area (Surrey) and were delighted to have found this band. With amazing levels of professionalism and musicianship they had all our guests hitting the dance floor from the off. What a band! Without a doubt the best Surrey wedding band you'll find ? ”

“Thanks to you and the rest of the band for an excellent performance last night. I received many comments about the quality of your music and you certainly got people up dancing, which is what it is all about. ”

“I just wanted to express our gratitude for the performance that you guys gave at our wedding on Sunday, the dance floor was absolutely packed and swinging all night, which was really excellent! Brooke and I had a blast, as did all the guests. Thanks as well for letting me have a go on the drums, I really, really enjoyed it! Apologies I got a bit lost throughout the song and forgetting the ending - You'd never tell that I'd been practicing for months!! I don't think anyone noticed though. ? ”

“I just wanted to say a big ?Thank You? to all the band. Everyone really enjoyed the music ? there were people dancing who I have never seen on a dance floor before!?The set list was just right and your whole set-up was very professional and well organised. We would definitely recommend you to anyone else looking for live music.?I hope you enjoyed the evening even half as much as we did. ? ”

“They were fantastic on our wedding day, they got everyone up and dancing all night long with a great range of songs to suit all our guests. Weare so glad we booked them. ”

“When we looked for a band for our wedding the main thing we wanted was one that would get everyone up and dancing all night and they definitely did that! We had the best night of our lives and the band played a huge part in making that happen. We have had so many compliments from guests on the band; the choice of songs, the length of time they played and the fact the dancefloor was on fire all night. They helped us have the rowdiest wedding we've ever been to which is just what we wanted! Added to that, they were the nicest and easiest supplier we dealt with when planning our wedding. Book them. ”

“I just wanted to thank you and the rest of the band very much indeed for playing at my birthday party. You were absolutely brilliant - everyone said so. The choice of songs was just right and it was quite a feat to get all us old codgers up and dancing. You really made the evening. ”

“They were brilliant. Great professionalism beforehand and great music during. The dancefloor was on 'fire' with an age range of some 65 years. Thanks for helping make it such a special day for us. ”

“A huge thank you from Stacey and I for making our wedding so special, we wouldn?t even dream of using another function band! All of our guests commented on how great a band you are ? a testament to your professionalism.?? ”

“The band were amazing on our big day. Very professional, flexible and creative on the day and we thank you all for your wonderful music. You really got the party started and judging by the dancefloor being packed all night you guys did a fantastic job. ? ”

“Just wanted to say thanks for playing at our wedding last month, and for all your help in sorting everything for it during the build up! We had a great time and the band sounded amazing - there's been alot of good reviews from the guests of you guys. ? ”

“What a fantastic, friendly band! They played for our Wedding reception in April and we would recommend them to anyone. The songs got everybody up dancing and our guests commented on how great the band were. The communication and correspondence leading up to our wedding was very efficient, professional and personable. Thank you for a great party, we both loved every minute.?? ”

“The band were brilliant. The band learnt Park Life for our wedding so that we could continue the tradition of playing the song (expected by some guests!). Not only did we get it once, we also got the song again for our encore - to much cheering!! Our first dance to Chasing Cars was also magical. Everyone enjoyed themselves and many of the guests have commented to us about how good they were. Thank you! Many thanks for a great performance. ”

“You were AWESOME - any band that can get me pogoing in a corseted dress is OK by me! ”

“One of the finest function bands working in the UK today. This five-piece guitar-based ensemble of talented young musicians plays a floor-filling repertoire in a creative and original way. They’ll leave a lasting impression on you and your guests.’’ ”