This Essex singer & acoustic guitarist can provide entertainment of the highest quality to ensure your party, wedding or special occasion is one to remember...
Share Facebook Twitter
Recommended 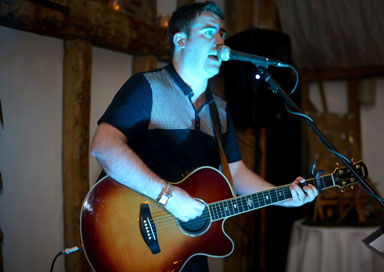 This Essex singer & acoustic guitarist can provide entertainment of the highest quality to ensure your party, wedding or special occasion is one to remember...

Originally from London, he has over 15 years experience in performing as a musician and has played at some of London's most distinguished venues.

He studied music from an early age and has performed in many different groups over the years including; original bands, tribute acts, function bands and on one special occasion a spoof boy band 'Fella a Trois', in aid of Comic Relief.

He has built up a hugely successful cover act performing at Parties, Weddings, and Corporate events throughout the UK. Armed with just an acoustic guitar and a microphone, his unique blend of popular cover songs and exceptional vocals make his act both distinctive and original. This is the reason why he has performed over 170 times since he started in 2008, which speaks highly of the demand for this talented musician.

An established songwriter, he recently finished as a runner up in a UK Songwriting Competition and his musical talents extend beyond Guitar and Vocals and also include Piano, Bass and Drums.

As a musician and also a member of the Musicians Union, he has gained valuable experience learning his trade, which has elevated his level of performance to that of the very highest quality and second to none. You really have to see a live performance before you can compare him to other similar musicians.

“Everybody could not believe how brilliant you were, from the laid back acoustic set in the afternoon drinks reception to the upbeat sets in the evening when you had everyone dancing. I had high expectations but you exceeded those ”

“You’re a diamond find mate. Thanks again and good luck with everything ”

“I have received so many compliments about the music (and musician) ”

“Your choice of songs, length of performance and voice were brilliant ”

“Anyone celebrating a special occasion should look no further than booking you, it will be be the best money they could spend ”