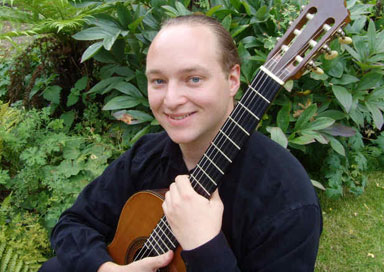 Looking for a guitarist for a wedding Somerset? The Somerset Classical Guitarist studied at Leeds College of Music where he won the prize for classical guitar and graduated with first class honours in 2001. Since then he has established himself as a much sort after performer and teacher.

He plays regularly as a soloist, but can also be booked with his guitar and flute duo.

The Somerset Classical Guitarist has studied with Luigi Palumbo, Nicola Hall and Simon Dinnigan and currently studies with the Pianist and Conductor George Hadjinikos and Classical Guitarist Mark Ashford. He has also played in masterclasses with Paul Galbraith, Allan Neave, David Leisner, Michael Partington, Nikita Koshkin amongst many others.

Reviews have praised his "careful attention to the dynamics.....wonderful versatility and perfectly loving rapport between him and his instrument" with statements such as ".....awesome and flawless - what a feast"

The Somerset Classical Guitarist plays a wide range of music from traditional classical guitar repertoire such as Bach, Villa Lobos, Ponce and Tarrega to modern works by Rawsthorne, Harrison, Henze, Britten and Brouwer. These are interspersed with his own compositions that often prove very popular with his audience.

He is passionate about a vast array of syles and pieces ranging from transcriptions of Lute Music by John Dowland and J.S. Bach to the Keyboard Sonatas of Scarlatti to more modern pieces by Leo Brouwer, William Walton, Allan Rawsthorne, Lou Harrison and Yocoh. He also enjoys the hispanic repertoire of Granados, Albeniz, Ponce and De Falla.

His recitals are an eclectic mix of styles and sound worlds with music from Tibet, Japan, Europe and America displaying the many techniques colours and timbres of the classical guitar with sensitivity and deep musicality.

The guitarist is available as part of a Flute and Guitar Duo here.

Pieces from the Classical Era

Light Pieces in a Modern Style

“His wide range of repertoire, virtuosity, and beautiful musical control of his instrument enthralled the audience, who were quick to demand his return to the series the following year! ”

“The booking process was very easy, and as I have said before, having been let down by a previous arrangement, we weren't really expecting to succeed in replacing the act at such short notice, so were delighted when you guys came through. Many thanks again, ”

“Punctuality, I can only guess was fine, obviously I wasn't there when he started, but have no reason to doubt his professionalism. He was certainly happy to keep going until every last person had sat themselves down for the meal. ”

“As you will know, that drinks reception time between wedding service and wedding breakfast, is a hectic one for the bride and groom, most of which was spent elsewhere having pictures taken etc, but I did have a brief chat with him when I finally got into the venue, all seemed well, his playing was lovely and just what we asked for, and I managed to have a better chat while he was packing up to leave. Several people commented on the nice ambient tone that he set, and the level of skill that he displayed. To answer your questions more directly: ”

“Hi Geoff, happy to give some feedback - it all went very smoothly, particularly given the very short notice, which made the service all the more commendable. I had a nice chat with the guitarist a day or so before the wedding, where we discussed the details of his playlist and logistics. ”