This flute and guitar duo are based in Essex and are available for weddings, functions and concerts in the South East performing classical and popular music.
Share Google+ Facebook Twitter
Recommended 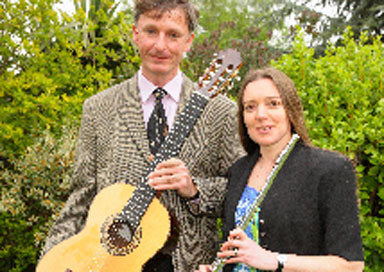 This flute and guitar duo are based in Essex and are available for weddings, functions and concerts in the South East performing classical and popular music.

The flautist began playing the piano at the age of 11 and the flute at the age of 13 and went on to study music at Colchester Institute. There she gained a Certificate in Music, and a Graduate Diploma in Music. Soon after, she was awarded an LTCL, Flute Teaching Diploma from Trinity College, London.

From her home in Colchester, she started to teach piano and flute to private pupils, and then began employment with Essex Music Services as a Peripatetic Piano and Flute Teacher. After a few years she was invited to become a Tutor Mentor with Essex Music Services, a job which she enjoys. She has played solo flute and piano in a number of venues, including Wells Cathedral, Colston Hall and Wesley’s Chapel, Bristol, Edington Priory Church. In 2009 she completed 25 years as first flute in the Essex Symphony Orchestra. She also has many years experience in playing at festivals, concerts, weddings and various other events.

The guitarist was first inspired to play the classical guitar when, at the age of 7 he heard the great Andres Segovia perform at the Theatre Royal in Norwich. After the performance the great man patted him on the head and it is thought that a little of the magic may have rubbed of (if only!)  After that inspirational encounter, he went on to study with Bob Parslow in Norwich before moving on to the Colchester Institute under David Miller, where he gained a BA Hons in Music.  From there he went on to study with Gerald Lee at the Guildhall School of Music to earn a Certificate of Advanced Solo Studies and LGSM.

As a classical guitarist he has earned a reputation for polished musical  performances characterised by a beguiling tone and sensitive interpretations..  His recordings, which include the premiere recording of Sir Malcolm Arnold's Fantasy, have been broadcast on Classic FM and BBC Radio 3.  His recent performances of concertos by Giuliani and Vivaldi were met with wide acclaim , as was his solo recital in Woodbridge which drew rave reviews in the press.

The guitarist from this group can also be booked as a http://findaperformer.net/act/201