This Cardiff classical guitarist is available for weddings and functions throughout South Wales and the West of England and has been playing guitar since 1969.
Share Facebook Twitter
Recommended 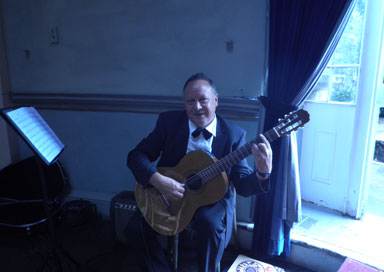 This Cardiff classical guitarist is available for weddings and functions throughout South Wales and the West of England and has been playing guitar since 1969. He has played in bands with musicians such as Pino Palladino, Mickey Gee and Donna Lewis. In 1998 he graduated from the University of Wales Cardiff with an honours degree in music after studying there with John Mills who was taught by both John Williams and Segovia.

In 1999 he also achieved a post graduate certificate in music education and has since been performing classical, romantic and Spanish guitar at weddings, corporate functions and special occasions.

He also can sing so can mix up his set with both classical playing and acoustic guitar and vocals if required.

“Thank you so much - you were fantastic – our guests loved your music. ”

“We just wanted to say a very big thank you for making our wedding day so special. We really enjoyed listening to you play and have received several positive comments from our guests too. ”

“His performance on the acoustic guitar with vocals and the classical guitar created a fantastic atmosphere for our wedding. ”

“His playing was exactly what we wanted and attracted some nice compliments from our guests. ”

“His playing was just right and created the perfect atmosphere for our wedding. ”

“He delighted the ear with a tasteful repertoire of chosen pieces ”