This guitarist started the guitar at the age of 7 at a local school in Bath before being offered a full scholarship to study at the Purcell School of Music.
Share Facebook Twitter
Recommended 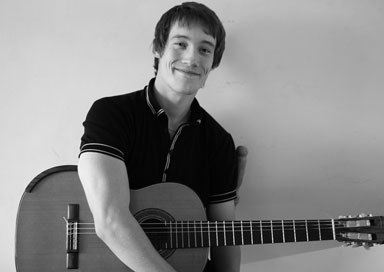 This classical guitarist started the guitar at the age of 7 at a local school in Bath before being offered a full scholarship to study with Roland Gallery at the highly acclaimed Purcell School of Music.

During his time at school he performed regularly as a soloist and in a guitar trio at numerous concert venues in and around the UK.
Whilst at The Purcell School he was fortunate enough to be awarded a bursary to attend the West Dean Guitar course and was the youngest ever player to receive the award.

In 2005 he was awarded a place at the RNCM in Manchester to study with Gordon Crosskey and internationally renowned guitarist Craig Ogden.
In 2009 he graduated from the RNCM and in 2011, was awarded a place at the Royal Academy of Musiic studying under the tutalage of guitar Professor Michael Lewin.
Over the years he has participated in Master classes with world class players such as David Russell, Andrew York, Fabio Zannon, Gerald Garcia and John Mills and recently performed Giuliani's second guitar concerto with the Bath Concertina. He is available for corporate events, weddings, and any other functions.
View similar acts: