A tremendously versatile guitarist and composer, this act is equally at home performing music from the classical repertoire, Brazilian music or jazz,.
Share Facebook Twitter
Recommended 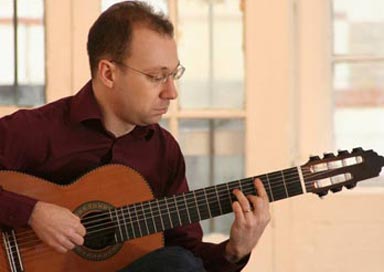 As soloist and as an ensemble guitarist he has performed at venues throughout the UK, including St Martin-in-the-Fields, St James' Piccadilly, the Barbican Centre, Cheltenham Town Hall and Oxford's Holywell Music Room. Festival performances have included Bath International Guitar Festival (1997, 1998, 1999), Ludlow Festival (1998), Hebden Bridge Festival (1998, 1999), Edinburgh Festival Fringe (1998) and the Cheltenham Festival of Literature (2000).
In addition to the groups and ensembles of which he is a regular member, he has also performed with, amongst others, saxophonist Rob Hall, sitarist Dharambir Singh, music-theatre company the Clod Ensemble, baroque orchestra the Georgian Camerata and British Youth Opera.

He is also active as a guitar teacher, working for the Da Capo Music School and Lambeth College in London, and for Hertfordshire Music Service at Watford School of Music. His teaching activities have also included leading workshops, conducting ensembles and composing numerous pieces for the student repertoire, and in 2001 he was a member of the teaching staff of the Bath International Guitar Festival.
He is a graduate of the City of Leeds College of Music (GCLCM - Jazz, Contemporary and Popular Music) and of Trinity College of Music (University of London MMus - Performance and Related Studies).

Having studied the piano from an early age, and later both classical and electric guitar, he began his undergraduate studies at Leeds as an electric guitarist. Influenced strongly by guitarists Ralph Towner and Egberto Gismonti, he became fascinated by the possibility of using the classical instrument and its technique for playing improvised music and elected to transfer to study classical guitar. For the remainder of the diploma course he studied under the College's classical guitar professor Dr Graham Wade, the Segovia scholar and biographer of Rodrigo.

While at Leeds he also studied North Indian classical music for a time with highly respected sitarist Dharambir Singh. He graduated in 1993 with prizes for guitar performance and composition, and was awarded the Ricordi prize for musicianship in 1992 and 1993.
Having studied the classical guitar in the context of a jazz diploma course, he now felt the need to spend some further time specializing in classical repertoire, and decided to move to London in order to study at Trinity College of Music with guitarist and composer Gilbert Biberian. Biberian's own music frequently combines a rigorous classical approach with Turkish and other Middle Eastern traditional influences, and was a source of much inspiration in attempting to comprehend a varied musical background.

In 1994 he graduated from Trinity with the University of London's Masters' Degree and was also awarded that year's chamber music prize. While a student he also took part in master classes with John Mills, Benjamin Verdery and Paulo Bellinati, and in 1992 he attended the Cordoba Festival, where he studied with Cuban composer and guitarist Leo Brouwer.