This classical & jazz guitarist has been playing the guitar for many years and is available for weddings, parties and corporate functions throughout the region.
Share Facebook Twitter
Recommended 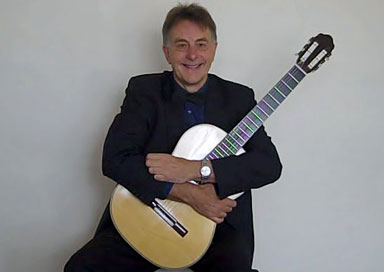 Looking fr a wedding guitarist in Eastbourne? Twice winner of the Brighton Competitive Music Festival on Classical Guitar, and an Associate of Trinity College of Music (Performance Certificate in Classical guitar), as well as all his grades to distinction level, he is well qualified for performance at concert level. As well as formal concerts (Brighton Chapel Royal, various local churches and music societies), he specializes in weddings and corporate and private functions. Light background music, unobtrusively and discretely amplified, provides the necessary ambience and atmosphere.

The entire wedding ceremony can be covered, from the pre-ceremony music, to specifically requested solo pieces during the signing of the register, as well as the reception and dinner music. Guests find the ice broken very easily, and particular pieces, coming from the established repertoire of artists such as John Williams and Julian Bream, are often requested from the enclosed list.

Recent functions for corporate clients have enabled presentations to be made in an atmosphere of the best classical music in the world. This enhances the profile of the company concerned.

Prior to undertaking his classical studies, he spent three years at the Leeds College of Music, studying Jazz Guitar. This enables him to add a new dimension of versatility to his performances. He has worked all over the world in this capacity, and has backed many famous faces including The Drifters, Brian Conley, and Frankie Vaughan. Since completing a recent residency at the Lakeside Country Club in Surrey he is now concentrating exclusively on his solo career. He has also worked in Cannes for a promotion for Citroen UK, and 'depped' in West End shows such as 'Cats' and 'Jolson'. Familiar with London hotels such as the Dorchester and the Savoy, he has entertained corporate clients such as the Board of BT.

Performances can be tailored specifically to the clients requirements, or as is often more usual, left to the experienced discretion of the artist. The tone is one of 'Class'....... and whilst the setting may be as relaxed and that of a lounge-bar, the effect of light, romantic classical guitar music always brings people together in an atmosphere of trust and co-operation.

“He was great. He took a lot of time to speak with us in advance to decide on the pieces and music he would play. I understand he even helped at the venue in the morning as they were delayed. He played wonderfully and we can only recommend him! ”