This guitarist is among a new generation of exciting artists to emerge from Ireland in recent years. Now based in London he is available for weddings and events
Share Facebook Twitter
Recommended 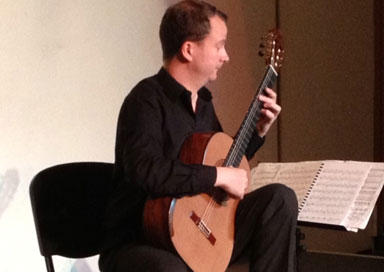 This Dublin born guitarist is among a new generation of exciting artists to emerge from Ireland in recent years. Now based in London he has performed as both soloist and chamber musician in the USA, Ireland and England.

He was fortunate to have studied with the world renowned Irish guitarist John Feeley at the D.I.T College of Music, Dublin graduating in 1997 with a B Mus Performance. Awarded the SIPTU bursary for postgraduate study abroad he then gained an M Mus Performance Degree under the tutelage of Carlos Bonell in London. Since 2004, with the generous financial support of the Irish Arts Council, he has commuted regularly to University of Denver, Colorado to study with the great Cuban virtuoso and pedagogue Ricardo Iznaola. He has also been his performing assistant at Bowdoin International Music Festival, Maine, USA, and in recent years has performed works such as Seven Desires by the Chinese American composer Tan Dun and Mundus Canis by George Crumb as part of the Gamper Contemporary Music Festival.

A big fan of chamber music, he regularly collaborates with flautist, David Cuthbert, as part of the group Flautarra. Together they have played widely in the UK providing innovative programming from Bach to new works by David Fennessy.
He hopes to undertake an Artistic Diploma at the University of Denver in the near future and has just released his debut CD Saudade including works by Scarlatti, Turina, Barrios and Lovelady.