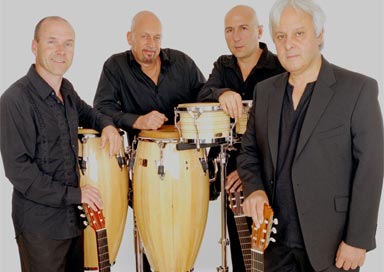 Looking for a Latin band in London? This fantastic and experienced Spanish and Latin band play Gypsy Kings songs mixed with South American and Spanish music - ideal for weddings and parties or any event that needs the atmosphere of a Spanish fiesta.

The standard line-up is a 4-piece, consisting of 3 Spanish guitars and Sax, with percussion and bass guitar tracks on backing track. They can however, also use a live percussionist and Bass player as on the video.

If you have a budget limitation they can be booked as a duo and they can play instrumental music as well as offering vocals.

They have a full repertoire of Gypsy Kings/Latin rumba material including Bamboleo, Volare, My-way, Lambada, La Macarena etc, and can vary their playing from soft background instrumental music to lively dance music as needed. They play through their own state-of-the art P.A. system, perfect for either small or large venues. During breaks, they can play background C.D. music through the PA. System.

Guide price is based on a duo booking

“We were totally happy with our choice of act and our guests were very appreciative and loved it. Would definitely hire them again. ”

“Dear Geoff, We were thoroughly delighted with the trio; they were very professional and perfect for the day. The whole booking process was a pleasure ”