This classically trained guitarist is based in Leicestershire and is available for weddings, functions and concerts offering both classical and popular music.
Share Facebook Twitter
Recommended 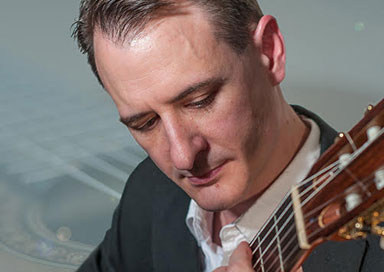 Are you looking for a classical guitarist in Leicestershire for a wedding, function or concert? The Leicestershire guitarist has distinguished himself as one of the most talented and versatile guitarists of his generation. A top prize-winner in several international guitar competitions, he has performed as a recitalist and concerto soloist in over twenty countries throughout North America, Europe and Asia.

His performances have been broadcast on television and radio throughout the world, and he has recorded five compact discs, including a critically acclaimed recent release of Beatles' song arrangements for guitar.

His repertoire and performances bridge styles ranging from classical to jazz to pop and world music, and have enchanted audiences and critics alike with their virtuosity and great range of expression.

In addition to his concert performances, he also enjoys providing a musical background for weddings, corporate functions, exhibitions and promotions. With a mixture of light classical, Spanish music, jazz and standards, he can add an extra touch of class to any social or business occasion.

"...conjured a wonderfully rich world from his instrument in this spellbinding concert. Anyone interested in the best of what's being written for the contemporary guitar should seek out Alan Thomas, who exudes confidence and pleasure in his inspired playing and repertoire." Classical Guitar Magazine

"What strikes one most about this collection are his bold arrangements. He takes the feverishly adolescent exuberance of "She Loves You" and transforms it into a lovely, achy, mature love song. It's a completely fresh reading and beautiful -- and it's pure genius." Minor7th.com

"…vast personal and musical charm… his concert programs are distinguished by a masterly virtuosity, exceptional expressiveness, and a unique and inimitable style." The Azerbaijan (Baku)

“I just wanted to send you an email to say thank you so much for playing at our wedding. The music was amazing and it was just how I imagined walking up the aisle to you playing. Many thanks for making our day so memorable. Everyone said that the touch of you playing made such a difference in the church. ”

“Didn't have time to speak to you on the day but just wanted to say a big thank you. Everybody remarked on how lovely the music was. Really created a great ambiance! Once again, thank you. ”

“Thanks so much for providing the perfect music for the party last weekend.! It was exactly as we wanted and Mum thoroughly enjoyed her 80th birthday! ”

“Thank you so much for the gorgeous music on Saturday. We loved it! ”

“Many thanks for everything on Sunday, everyone commented on how great it was to listen to you play so well. Thanks again, Caroline and I thought you were excellent! ”

“Thank you so much for playing so beautifully at our wedding last week. We greatly appreciated what you brought to the ceremony and the effort you had put in to play the music we had requested! ”

“Just a quick note to say thank you so much for your fantastic guitar playing at our wedding at Beau manor Hall. It really set the scene for a beautiful day! ”