This classical guitarist is based in Cork and is available for weddings and functions throughout the county performing Baroque, classical & Latin American music
Share Facebook Twitter
Recommended 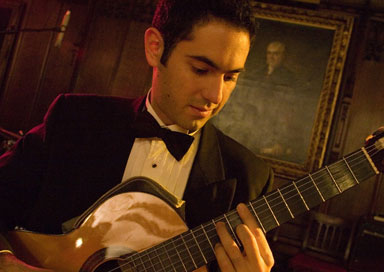 Spyros studied under G. Milliaresis, a student of the late Andre Segovia, and obtained the "Greek Diploma in Classical Guitar" with distinction at the age of 17. He has competed in Greece, Italy and in the U.K, and performed in many solo recitals in addition to providing the music for weddings, garden parties, balls and other private functions. He has also played for restaurants.

He offers a varied programme, which will always be chosen to match the occasion and accomodate the tastes of those for whom he is performing. This includes Rennaissance (L. de Narvaez etc.), Baroque (among others Frescobaldi, J.S. Bach), Classical (Sor etc.), Romatic-spanish (Albeniz, Tarrega etc.), Latin American (Villa-Lobos, Barrios) and Greek music (traditional and modern popular songs.)