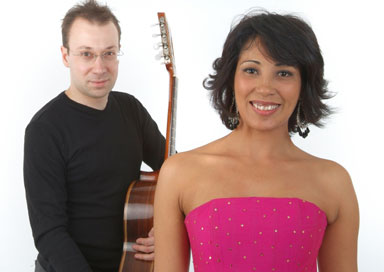 The singer is from São Paulo, Brazil. Possessing a captivating voice full of warmth, vitality and Brazilian soul, she sings a repertoire encompassing not only classics of Bossa Nova but also sambas old and new, Brazilian and other popular music, jazz and beautiful original songs.

She paid her dues singing in numerous bars and clubs in São Paulo's Vila Olímpia district, and developed her own beautiful style taking inspiration along the way from great names in Brazilian music such as Elis Regina, Tom Jobim, João Gilberto, Marisa Monte and Zizi Possi.
In São Paulo and more recently in London, she has worked both live and in the studio with numerous fine producers and performers including Ronaldo Rayol, Gui Tavares and Gustavo Marques, and toured England with the widely respected choro/samba group Caratinga. Alongside concert appearances she has also performed at private events in some of London's most exclusive five-star venues, including the Lanesborough Hotel, the Landmark Hotel and Kew Gardens.

He has performed at numerous major venues including the Royal Festival Hall and the Royal Albert Hall, and has performed and recorded with major artists including an appearance on Aled Jones' chart-topping release The Christmas Album. He also performed with the London Philharmonic Orchestra in the live performances of Howard Shore's Oscar-winning scores from The Lord Of The Rings.

He has performed for private events at numerous major venues including the Grosvenor House Hotel, the Brazilian Embassy, the Victoria & Albert Museum and Leeds Castle.

As well as the Brazilian music which is at the heart of their repertoire, they also play beautiful renditions of music by artists such as Sade and Norah Jones; examples include: Don't Know Why, Your Love Is King, Killing Me Softly, etc.

“The duo were excellent. They have been great to work with over the past few months and delivered exactly what we wanted. They made our wedding ceremony very special, would use them again. They are both very talented musicians. ”

“Excellent they were. They were very punctual and slotted in nicely with the afternoon. Music was superb and would thoroughly recommend them. A shame I don't have any events to hire them again! ”