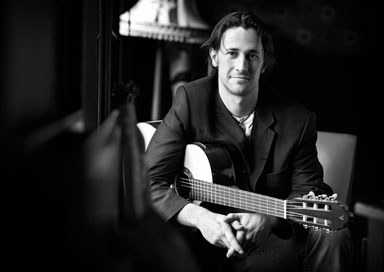 This guitarist is currently based in London and hails from South Africa with time spent in between in Chicago and is available for weddings and corporate events. Since he began learning the guitar at school he has continued to study and came 2nd in the South African National Guitar Competition in the under 21 class.

In 2006 he fell in love with the blues, and moved from South Africa to Chicago where he stayed the majority of the year playing jams at various venues (Rosa’s Lounge, House of Blues, Buddy Guy’s, Kingston Mines, B.L.U.E.S) and learnt what it was all about from watching everyone around him. A changing point in his life and he had never pursued anything as passionately before, from history to culture to what music today would be like without its influence. This has also been a good grounding for jazz studies which he am currently focusing on.

He left the states in to pursue his musical career in London. Since arriving he has played at various venues throughout London including bars, clubs, restaurants, hotels as well as in Birmingham, Essex, Edinburgh and abroad in France, Germany, Holland and Greece.