This flamenco guitarist has been performing since he was 13 and has dedicated himself to developing his own unique style of composition and performance.
Share Facebook Twitter
Recommended 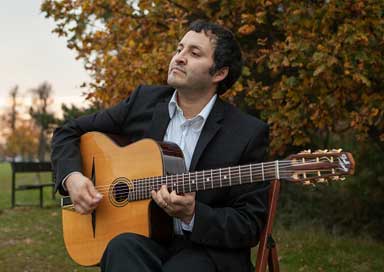 This flamenco guitarist has been performing since he was 13 and has dedicated himself to developing his own unique style of composition and performance, which demonstrates a wide range of influences from classical guitar and flamenco to jazz and Latin American styles.

He can be hired as a solo flamenco guitarist or in a duo, trio performing Gypsy Swing and Latin Jazz and is also available to perform with a flamenco dancer.

Born in Santiago de Chile in 1973 and based in the UK since 2005, he works actively as a concert guitarist, composer, producer and teacher.  He has a style of performance which demonstrates a wide range of influences from classical and flamenco to gypsy jazz and Latin American styles.

He has played in prestigious venues around the UK such as the Royal Albert Hall, Queen Elizabeth Hall and Womad Festival; and in some of the most renowned theatres and festivals throughout Europe.

In June 2006 his talents were internationally recognised when he won a first prize at the 'Nino Ricardo International Guitar Competition' held in Murcia, Spain.

He has recorded 5 independent albums and he has played with some of the most important artists in the World Music scene, such as Kai Eckhardt, Tomatito, Alec Dankworth and others.