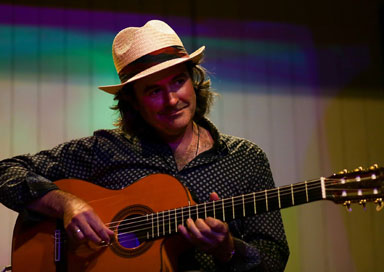 This Flamenco, Latin guitarist is based in the South West and is available for weddings and functions. He started playing classical guitar at an early age. At fifteen a rock influence took hold; he moved to electric guitar and has since played in twelve bands, and performed in the UK, France, Germany, Greece and Australia.

Having taken lessons with leading UK Flamenco Neuvo virtuoso Jon Salfield in 2000, he is now an accomplished Flamenco guitarist, combining elements of his classical and rock experience to form a unique and exciting style.

He plays live on a regular basis, as well as recording music in his own studio. Of live performances, he says:

"I like to provide a good mix of musical styles, so that all tastes are catered for. My live repertoire varies from Classical guitar standards, such as Romanza and Asturias, through interpretations of contemporary music, including many songs from the Beatles, to lively and often percussive Flamenco standards, often delicately incorporating hints of Arabic and Latin influences."

“All the guests really enjoyed the music and were very impressed with his playing. He very kindly played some special requests . ”

“Fantastic guitarist, great song repertoire. Prompt and courteous in replying to emails etc; very professional. Everything we wanted for our wedding reception. ”

“Utterly fabulous. From the initial booking to the final performance we were super happy and confident in him. His playing abilities are outstanding and set the Scene for our casual evening reception perfectly. Thank you so very much x Laura and. Rob ”

“Marcus was everything we hoped for and more. Our guests enjoyed listening to his performance and said he was an exceptional and a talented guitarist. He was absolutely perfect in every way. ”

“We just wanted to write to thank you for your contribution to our wedding day. I'm so glad you agreed to play for us - it helped so much to create a great atmosphere that really suited our style. We recieved lots of lovely comments from our guests about you. Thanks again & all the best. ”

“I just wanted to say another massive thank you for being there on our day - everyone commented on how amazing you were and it added so much to the vibe we wanted after the ceremony. ”

“Now we're back I just thought we'd drop you a quick line to say thank you for your contribution to our wedding day. Not too subdued, not too prominent, just perfect. Everyone enjoyed everything you played so that's gained you a few more fans. ”

“Just a quick email to say thank you for making our reception so special at Offshore on Saturday. Everyone commented on how lovely the music sounded ”

“Thank you so much for playing at my wedding on 13th August. The music was just perfect and exactly what I imagined. ”

“Can we say a huge thank you from Ian and I for all your care and love you put into making our wedding such a fantastic day. It was incredible and you contributed so much into making it the best day of our lives. Thank you! ”

“Thank you once again for your fantastic contribution on our special day in August at Woodlands Castle. You were truly magnificent and our friends and family still talk about you whenever we talk about our wedding- a real testament to your playing ability and imagination! ”

“Thank you again for what you did for us yesterday. Everybody commented how good you were - a very talented guitarist. ”

“We both just wanted to say thank you again for playing your wonderful music for us on Saturday. It really made our reception extra special! ”

“All in all we were more than happy with our booking in every aspect from the communication to the music on the day and would strongly recommend him to anyone. We've since bought his albums and listen to them constantly. ”

“Hi Geoff, We booked this act for our wedding and I can honestly say we couldn't have been happier. Communication prior to the event was perfect and he gave us every confidence in his professional approach. On the day of the wedding he arrived exactly when he said he would and set up quickly and efficiently. His performance was superb, some of the most technically proficient playing I've heard. One of the guests even commented that it sounded like two people playing as it was so complex. He was very approachable and happy to chat to those guests with an interest in his music. ”