The Scottish Guitar Duo was formed in 2010 by two experienced performers having played in various bands and trios for many years - available for all events.
Share Facebook Twitter
Recommended 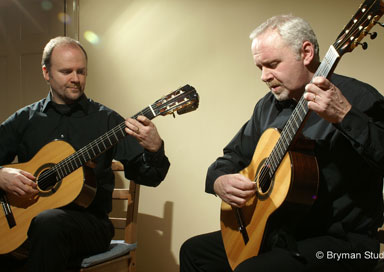 Having opened for the likes of Dick Gaughan, Duck Baker and Michael Marra the duo are now starting to make a name for themselves. Using nylon and steel string guitars and the dobro for slide playing the duo create imaginative instrumental arrangements of traditional fiddle, pipe, harp and song melodies taken from different regions of the celtic world.The repertoire can also include works by Scottish composers such as John Maxwell Geddes and Peter Maxwell Davies. Music with a Scottish connection always features prominently from early works associated with musicians of the Scottish royal courts to trad tunes and works by contemporary Scottish composers.

The duo bring together a number of acoustic guitar traditions: steel string, classical and slide guitar and explores the possibilities for the instrument within the world of traditional music. The role of the guitar in Scottish and Irish music has mainly developed, with some notable exceptions, as a backing instrument (and not always a welcome one!).

Their debut album takes another approach, presenting these well known tunes in a new self contained ‘guitaristic’ way but refusing to stray far from the original intended musical aesthetic. The title reflects the style of the musical arrangement each instrument weaving with the other to create a soundscape which shows these familiar tunes from the fiddle, pipe, harp and song repertoire of Scotland in new light.