This tremendously versatile guitarist is able to play Italian music, jazz, classical, flamenco or Latin guitar and is available as a soloist or as a duo.
Share Facebook Twitter
Recommended 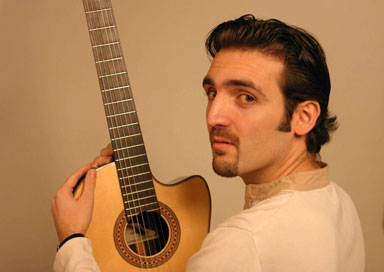 This Surrey Latin guitarist is available for functions and concerts.This tremendously versatile performer is able to play jazz, classical, flamenco or Latin guitar and is available as a soloist or with another guitarist.

The Surrey Latin Guitarist was born in Sardinia, an Italian island, which has been influenced by a variety of cultures as it is in the centre of the Mediterranean Sea. Similarly, his musical palette has been influenced and enriched by music from all over the world. After traveling, studying and performing in different parts of the globe he is establishing himself as guitarist, composer and teacher. Started self-teaching guitar at a young age he then studied classical guitar with Marco Meloni an Early Classical Music specialist. His love for improvised music and jazz brought him to study jazz in Ravenna with John Scofield, John Surman and Tony Oxley with whom he performed at the "Teatro Dante Alighieri".

In 1994 moved to London to study at Goldsmiths College, where he gained a diploma in jazz and Popular Music (with special commendation) and one in Music Teaching to Adults. Went on to study composition and arranging for jazz Orchestra with the Composer Mark Bassey, and Arabic music in London as well as in Tunisia, Jordan where he played for The Royal Family.

The Surrey Latin Guitarist joined forces with Lebanese percussionist Rony Barrak, mixing Arabic rhythms and scales with jazz, Brazilian and Flamenco music performing in Beirut, Tripoli and other cities in Lebanon and in the UK at the Purcell Room, St.George Bristol. He then recorded in Beirut for EMI and the top Middle Eastern singer Nawal Zoughby.

Next, he supported Shirley Bassey at the Royal Festival Hall, with the band 'Vibration' and performed along side the saxophonist Andy Shepperd at the Brecon Festival. At the City of Birmingham Hall he arranged one piece for the Orchestra and performed at the jazz Cafe, London.
He also performed with Japanese musicians such as Shima Kobayashi (Chromatic Harmonica) and Ryuko Mizutani (Koto) at the Queen Mary Hall, at the Anglo Japanese Centre and at the BMIC in London composing for these concerts a Suite for Harmonica, Koto and Guitar and arranging with Kobayashi Traditional Japanese music.