This jazz and classical guitarist is based in London and is available for weddings, functions and concerts. He grew up in a family of musicians in Chicago.
Share Facebook Twitter
Recommended 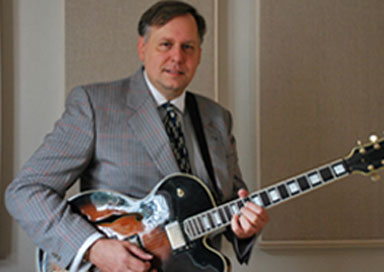 This jazz and classical guitarist is based in London and is available for weddings, functions and concerts. He comes from a family of professional classical musicians based in Chicago Illinois. He attended Indiana University in the late 1970's where he studied under David Baker and was featured in several of the school's big bands.

He moved to New York in the early 80's where he made a living as a musician/writer before emigrating to London in 1986 after suffering a severe case of anglophilia - now cured, thankfully.

He has played jazz and classical gigs around the world and has had the pleasure of playing and jamming with wonderful musicians and singers including Lucy and Irving Heiberg, Carlos Santana, Ralph Towner, John Abercrombie, Frank Griffith, Chakka Khan, Anne Pigalle, John Sex, Phoebe Legere, PM Dawn, Youth and the Tiger Lilies