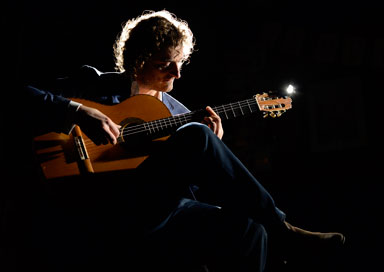 This guitarist is based in London and is available for concerts, weddings and functions. He is a very versatile performer offering arrangements of modern pop tunes as well as being a highly accomplished classical and flamenco player.

Born in Southend-on-Sea, England in 1981, he began learning the classical guitar at the age of seven. He later gained an interest for traditional Spanish music, studying the intricate rhythms of flamenco. He won his first guitar competition award at the age of 10.

In 1997 he enlisted to study jazz and classical music at Leeds College of Music, England. He studied here for three years under the tutelage of Luigi Palumbo (classical guitar) and left with the much coveted college guitar prize.
He then went to further his studies in Seville, the capital of flamenco with guitarists such as Fran Cortes, Miguel Angel Cortes and Manuel Berraquero. He still studies the accompaniment of Cante and Baile in Seville.

He has performed in England, Ireland, Denmark, Holland, Spain, Germany and France with shows such as Zorro, Fame, Sisters of Soul, Carmen, and West Side Story as well as performing as a solo artist and guitar demonstrator.

He has made numerous television appearances and appeared at the Dundee Guitar Festival, Rhythms in the City Festival, Leeds, the Funk, Soul and Jazz Festival, London and the Edinburgh Festival, Scotland.

This guitarist also has the option of a battery amplifier which is very useful for outdoor bookings.

“We were delighted with the guitar music played at our ceremony - it made the day more special. ”

“He played at our wedding ceremony and reception last weekend. He learnt and played a Morricone piece that we asked for as we walked down the aisle, and played it more beautifully than I could have imagined. Our guests commented on how lovely his music was and he was easy to get in touch with leading to the big day. Highly recommended. ”

“Hi Geoff, Everything was great. The music was excellent as was the guitarist.Kind regards ”

“Thank you so much for playing so beautifully at our wedding at Brimpton. We've had comments from numerous guests at how wonderfully you played and what a great atmosphere it set. We are currently listening to your wonderful CD and enjoying reminiscing about the day! Thanks again, ”

“Everything was fine. We liked him very much and thought that his music was ideal. I was sorry that I did not see him on his departure to thank him again for helping to make the event so pleasant. The booking process worked well. Thank you for your contribution. ”