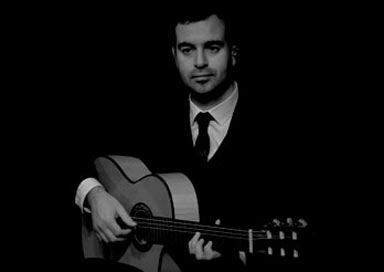 He has plays professionally all over the UK and abroad. Extensive travel overseas opened his eyes and ears to the musical possibilities for live performances.

A trained classical guitarist, he honed his flamenco skills in Spain enabling him to accompany dancers using the complex flamenco rhythms.  His interest in different musical styles led him to study to gain a diploma in World Music and then a further diploma in Jazz studies.

The Brighton Spanish Guitarist has a flare for Latin music and jazz led him to focus on Latin Jazz incorporating vibrant Brazilian rhythms with the advanced harmonies and improvisations of jazz.  His guitar influences include Baden Powell, Joe Pass, Sylvain Luc, Julian Bream and John Williams.

As well as performing abroad and all over the UK, he is immersed in the thriving music scene in Brighton and performs regularly in a variety of venues (and Radio including BBC) and has been in demand at international Jazz festivals both solo and with many bands and ensembles.

His classical set incorporates a large repertoire of Spanish pieces such as "Recuerdos de La Alhambra" and South American pieces.  A selection of Argentinean folkloric compositions are performed including Chacareras, Gatos, Chamames and Milongas through to Brazilian Choros and Sambas and Venezuelan Waltzes.

The Brighton Spanish Guitarist has a huge Jazz repertoire incorporating many of the standards by composers such as Gershwin, Porter et al.  All the Boss Nova and Samba classics are also included by composers such as Jobim.  Jazzwise magazine has stated in reviews that "he beautifully updated the Laurindo Almedia nylon-strung guitar style!"

“Fantastic Classical guitarist. He was lovely and so easy going. I felt that he really understood what was required for our party. ”

“He was really brilliant. He arrived in plenty of time then I was very busy so he just set up in the allocated area and started as soon as he was required. His playing provided the perfect background music for our canape reception. I would highly recommend. ”

“He was exactly what we hoped for: professional, punctual and an amazing musician He knew exactly how to pitch the music and helped to create an great atmosphere that everyone really appreciated Thank you ”

“Just wanted to say thank you so very much to the guitarist for performing at our wedding yesterday - what he did was superb! He was absolutely fantastic, arrived well before time and played what we had asked for as my wife Sam walked in which wasn't part of his repertoire.. everyone commented on our choice and thought he played beautifully. I would thoroughly recommend him and your company to anyone .. top notch .. thank you so much for your time. We had a fantastic day and evening and so pleased he played for us. All the best ”