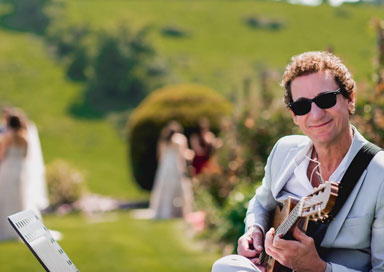 This guitarist is based in Devon and is available for corporate events, weddings, private party's, music festivals and session work.

"The Spanish guitar can be a bit of a precious instrument, however, seen in his hands you are led to believe it is simplicity itself. He literally flies all over it producing everything from beautiful melodic sounds to funky licks with the occasional hypnotic repetitive phrasing you would expect from a folk violinist" Scene Magazine

"Thanks for showing me up at all three of MY shows !!!" Midge Ure

He has shared the stage with name artists such as guitar legend Albert Lee, John Zarradln, AI Stewart, Kiki Dee and Carmelo Luggeri, and the Hampsters. Also a successful support tour with Midge Ure.

The choice performer for the crews and celebrities involved in the Transat Race preparations, on board the Swan Fan Makkam and regularly works performing at high profile corporate events in the South West.

Along with the standard classical guitar repertoire, he performs unique arrangements of classic tunes such as Take 5, Classical Gas, Hotel California, Human Nature, Bohemian Rhapsody, Eleanor Rigby, Somewhere over the Rainbow plus many other rare and traditional guitar pieces, including many of his own compositions. Also some arrangements of very unexpected music not normally heard coming from a solo instrument. He can perform using classical/Spanish guitar, steel string acoustic and also electric guitar! Tasteful use of a looping pedal can also be incorporated to augment the act to something more usually heard coming from a full band !

He uses a state of the art Bose sound system which not only sounds fantastic but also looks very stylish and elegant and takes up little space. It can also double as a full range sound system for those that require some DJ skills after his performance as a guitarist. Or perhaps some additional ambient music before or after the performance.

The full repertoire would be too long a list. Any song can be requested and unless impossible can be learnt specially for an event.

“He played the welcome music, the song for ‘the walk’ and provided an amazing atmosphere to our celebration drinks. He was fantastic from start to finish, and I don’t just mean the day! He was highly collaborative in the creation of a bespoke and perfect slowed down version of a track for my bride to walk down the aisle to, completely understood the tone of music we wanted played and delivered this with aplomb! He perfectly hit the tone of the day, was friendly, smiling, smart and charming, but most importantly his work on the guitar was breath-taking. I cannot recommend using him for your special day highly enough, the perfect accompaniment to a perfect day ”

“Thank you so much for playing at our wedding ceremony - I didn't get a chance to speak to you on the day (damn photos!) but wanted to pass on my appreciation. We had lots of comments about you - mainly 'where did you find such an amazing guitarist?!!! You really made our ceremony special! ”

“How amazing to have you playing at our Joy of Music Evening. Thank you so much to do so. You certainly added a special dimension to the evening. We wish you much success in the future ”

“Huge thanks for playing in Modbury on Sunday, I know the weather was not too good but your set was absolutely outstanding, I stood in a row of spellbound guitarists/musicians and watched your “Hotel California” in disbelief that the whole thing can be played on one instrument! I have had continuous great feedback from people who had never seen anything like it ”

“Thank you so much for entertaining our guests at our wedding on Saturday…you wouldn’t believe the amount of comments from friends and family asking all about you. Your guitar playing is so fantastic and relaxing ”