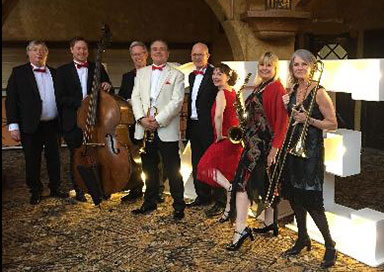 The band can also recreate the sounds of the Glenn Miller band you need a minimum of 8 musicians and the guide price is for the full 8 piece band. Smaller band options are available with a tailored song list to suit the instruments.

Our swing specialise in the popular music of the jazz era including the roaring 20’s Gatsby/Peaky Blinders sounds, classic Broadway & Hollywood of the 30’s & 40’s and the Big Bands, 50’s Rock’n’Roll  and now their new offering: The Swinging 60’s.

The band will create the perfect atmosphere for your event and can provide both background music and full evening entertainment for dancing.

The band play music which has been specially arranged to suit the very flexible and rich sounding line up of the 8 member band. The band size is optimal to give an authentic musical performance emulating period ensembles from dixie jazz to the big band sound.

Their programmes is well researched and designed to keep the joint jumping and can is also suitable for 40's Jive and Lindy Hop events.

They also have an extensive music library and are able to offer you Modern Ballroom, Latin American, Old Tyme and Modern Sequence dancing at your request.

The concept of the band came from a desire to perform and bring to the public the great jazz and swing based music of the dance band days when music was made by composers, musicians and bandleaders rather than producers and technicians.

The band play completely live and do not use backing tracks or any other performance enhancing contrivance. They have recently added a Swinging Sixties set to their offering.

They are not a guitar band so expect something more from Austin Powers rather than the Rolling Stones alongside Dionne Warwick, Dusty Springfield, Bobby Vee, Bobby Darin, Burt Bacharach etc. You will love it !

The line up consists of: