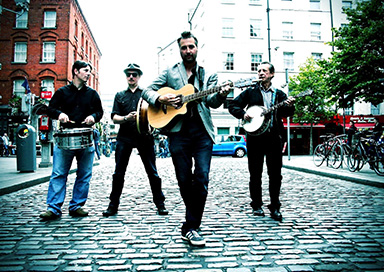 Looking for a trad band for your special event or wedding in Ireland? Traditional music at its best with top musicians available to perform at your wedding or event.

Irish Wedding Band are based in Dublin and have played all over the world, collectively & individually, sharing stages with all the greatest names in Irish Music and beyond.

The band is led by a modern day Balladeer with contemporary story songs using traditional instruments and can be hired as a 3, 4 or 5 piece band.

The Fiddle Player comes from Dublin and plays music professionally both as a performer and also as a session musician around Dublin.

She cites appearances in the Olympia Theatre, Croke Park & most recently the Barrowlands Ballroom in Glasgow, as some of the highlights of her performing career to date. She can regularly be spotted playing traditional music at sessions and accompanying singers around various venues in Dublin city.

Alongside this she works as a recording artist and has put her name to various albums to date. Another string to her bow is that Anna Mary teaches fiddle during the week.

The Banjo and Mandolin Player is one of Ireland's finest players and began his music career in the 1970's, performing live and recording with artists including Davy Spillane, The Dubliners, The Chieftains, Paddy Keenan, Makem & Clancy and Planxty, performing live in the USA, Scandanavia, the Middle East and all over Europe.

In his time off he likes to relax at his home away from home in The Canary Islands.

The Singer/Songwriter & Vocalist has performed in the USA, the UK, Scandinavia, the Netherlands & France and at iconic venues like The Olympia Theatre, Whelans and Croke Park.

His debut Album featured a who’s who of top Irish Musicians and he has several National & International TV and radio appearances to his name, and has had his music featured in movies and short films.

The Uilleann Piper & Whistle Player has been playing the pipes & whistles since the age of 15. As a founding member of KÍLA he released 11 albums and toured the world with performances at top festivals including Glastonbury, Womad (Aus/NZ) and Montreux Jazz Festival.

As a solo artist, he has guested with U2, Baaba Maal, Sinead O Connor, Donal Lunny & Jane Sibery. He composed the music with Kíla for 2 OSCAR winning animation films in 2012/2015 — while his solo compositional work on ‘Ireland’s Wild River’ was nominated in the Best Music category at the 2015 EMMY Awards. He has facilitated music workshops at primary & secondary level schools and theatres at home & abroad as well as presenting the TG4 show Geantraí & performing in and composing music for theatre.

The Lap Steel Guitar & Bodhran Player has played throughout Ireland, Finland, Estonia, the United States, Canada, New Zealand and Australia with many musicians over the last two decades. He has recorded several albums and is the founder of Flood Plain Studios in Dublin, where he records and produces artists from a wide variety of genres, from Nigerian rap to Scottish bagpipes. While he is interested in all styles of music, he is mainly requested as an accompanist in traditional Irish music sessions around Dublin and as a recording studio guitarist. He studied at the National College of Art & Design in Dublin and at the École des Beaux-Arts in Rennes, in Brittany, and has a master’s degree in music technology.