This classical guitarist is based in county Durham and is a full time guitarist over 20 years experience playing at weddings and events in the North East.
Share Facebook Twitter
Recommended 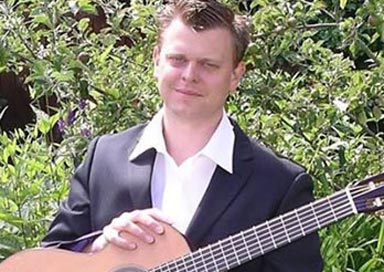 This classical guitarist is based in county Durham and is a full time guitarist and teacher with over 20 years experience in both fields. He holds diplomas in both Electric and Classical Guitar performance and enjoys playing at weddings and events.

He first picked up the guitar around about the age of twelve and had no formal training until he attended the London Guitar Institute, “Europe's Finest School of Modern Music” in 1995.

It was here that he received regular lessons from some of the most respected players and teachers in the world including Dave Kilminster, “Big” Jim Sullivan, Shawn Baxter and Iain Scott, who was himself taught directly by Frank Gambale.

In 2005 he began studying Classical Guitar with BBC Choir of the Year Conductor John Forsyth, who was himself a student of both Julian Bream and John Williams; two of the most important guitarists of the 20th Century.

In February 2011, he was honoured to have the opportunity to perform at the “Best of Darlington” award ceremony as well as being nominated for an award for Services to the Arts.

“Accurate and assured: A complete mastery of the score, capturing the character of the music admirably.” Dr.Andrew Padmore